Rate cut in PPF: Still worth your money?

As inflation is also on the lower side, being tax-free, PPF is still capable of generating real returns

On 18 March, the government cut interest rates on small savings schemes, which includes products such as the Public Provident Fund (PPF) and Senior Citizens Savings Scheme (SCSS). Just as the dust was settling after the government decided to roll back the Budget proposal to tax Employees’ Provident Fund withdrawals, the cut in the interest rate of small savings products, especially PPF, stoked another social media storm. But should this cut make you rethink your PPF investment?

Our answer is a firm ‘no’, because if you look at the reduction in the context of overall falling interest rate and inflation, you will realise that PPF continues to be one of the best debt products. But before that, we must understand the background of small savings scheme.

Until the end of 2011, small savings schemes such as PPF came under the fixed return category as their interest rates remained more or less stable. So, PPF, for instance, gave 8% interest rate for about eight years.

In December 2011, acting on the recommendations of the report, the government made returns on small savings schemes market-linked. Rates on these products were benchmarked to government securities (G-secs) of similar maturity periods with a positive spread of 25 basis points (bps). One basis point is one-hundredth of a percentage point. For SCSS, mark-up was 100 bps, and for the recently launched Sukanya Samriddhi Account, it was 75 bps. It was also decided that the government would notify the interest rates applicable for the year on various instruments before 1 April every year.

Subsequently, the government felt that the positive mark-up tilted the balance of power in favour of small savings schemes, which put a lot of pressure on banks as they were unable to lower their interest rates. “The small savings interest rates are perceived to limit the banking sector’s ability to lower deposit rates in response to the monetary policy of the Reserve Bank of India," stated a government notification issued on 16 February this year.

To bring parity between the two, the notification did two things: first, it removed the positive spread of 25 bps on products competing directly with bank deposits. “The 25-bps spread that 1-year, 2-year and 3-year term deposits, Kisan Vikas Patra (KVP) and 5-year recurring deposits have over comparable tenure government securities, shall stand removed with effect from April 1, 2016 to make them closer in interest rates to the similar instruments of the banking sector," it said. The spreads of PPF, SCSS, Sukanya Samriddhi Account, 5-year term deposits, monthly income scheme (MIS) and National Savings Certificate (NSC) were not changed.

Secondly, it was decided to calculate the interest rate on all small savings schemes from the next financial year (FY17) on a quarterly basis to align their interest rates with the market rates of the relevant government securities. The new rates for the first quarter of FY17 were to be notified in March. 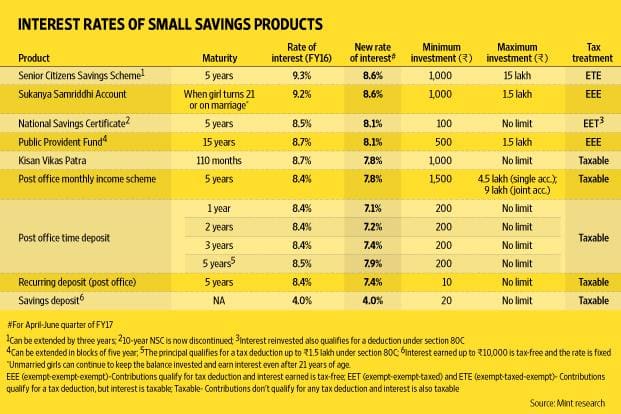 If you have already invested in a closed-end small savings scheme, then the new interest rate shouldn’t matter as it will not impact your money. Closed-end schemes are those in which you make a lump sum investment and stay invested for a fixed tenure. For instance, the interest rate on SCSS has changed from 9.3% to 8.6%. SCSS is a five-year product which can be extended by three years. Interest income is paid quarterly and the principal is returned at the end of the tenure. If you are already invested in SCSS, you will get 9.3% for the entire tenure. But if you plan to invest in the product in or after April, you will get locked into 8.6%. Time deposits, NSCs, MIS, recurring deposit and KVP also fall under this category.

PPF and Sukanya Samriddhi Account fall under the variable rate category. Every quarter, a new interest rate will apply. For instance, the interest on PPF is calculated on a monthly basis on the lowest balance between the fifth day and the end of the month. But the interest is credited at the end of each year.

Since small savings rates are pegged to the market, when interest rates fall, their rates will also reduce. Currently, inflation and interest rates are both on a downward trend. For instance, the Consumer Price Index-based inflation was 5.18% as of February 2016 and assuming long-term inflation rate of 6%, PPF with a tax-free rate of 8.1% will offer you a real rate of at least 2%. “Products like PPF are capable of generating real returns as they are tax-free. So, even as the rate gets cut, because of the overall market scenario, your strategy should not change," said Ankur Kapur, a Gurgaon-based investment adviser. The same is true for the Sukanya Samriddhi Account as it enjoys a tax-free return. For others, such as SCSS, time deposits or NSC, you need to compare their post-tax returns with bank deposits and other debt products.

“Since interest rates of SCSS are not that attractive, senior citizens should consider adding monthly income plans of mutual funds in their portfolios. Though returns are not guaranteed, these have the potential to deliver slightly better returns due to the equity component. You must also look at tax-free bonds for long-term returns," said Pankaj Mathpal, a Mumbai-based financial planner.

As far as PPF goes, stick to your asset allocation and maximise long-term debt investment through it. Also, from FY17 premature closure of PPF accounts are permitted for events such as a serious medical ailments. This is permitted with a penalty of 1% reduction in interest payable on the whole deposit and is available only for accounts that have completed five years from the date they were started.