Mumbai: Stock exchanges have sent notices to listed companies that share directors who have been disqualified for associating with other firms which haven’t filed their financial statements or annual returns for three years.

The notices ask such firms to explain why their directors have been disqualified and when the companies plan to replace them, said two people with direct knowledge of the matter. At least 500 publicly traded firms shared directors with suspected shell companies. 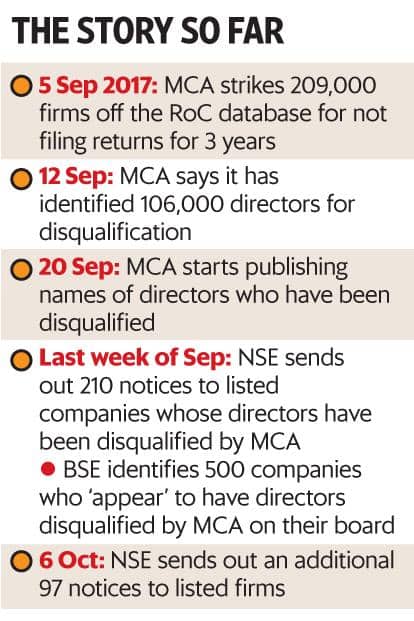 “The National Stock Exchange of India or NSE has so far sent out 307 notices to listed companies in two tranches seeking explanations on their disqualified directors. The first set of 210 notices were sent in last week of September and 97 notices were sent on Friday," one of the two people cited above said on condition of anonymity.

BSE Ltd has also identified 500 companies so far and is sending out notices to these firms. Mint could not ascertain the number of notices sent out by the BSE so far.

“The number could be larger as this is a preliminary assessment and more notices could be sent," said the second of the two people cited earlier, also on condition of anonymity.

“NSE has sent out the letters to concerned companies and has sought clarification on the subject matter," an NSE spokesperson said in an emailed response to queries from Mint.

On 12 September, the ministry of corporate affairs (MCA) issued a statement saying that it had identified 106,000 directors of companies that did not file their financial statements or annual returns for three straight years, violating provisions of the Companies Act, 2013. The names of the directors were subsequently made public.

As per the MCA directive, these directors cannot serve on the board of any company for the next five years. Some of the directors were disqualified retrospectively from November 2015.

Any digital signatures by these directors on annual reports, financial results and other company documents will not be accepted by Registrar of Companies (RoC).

“While most of (the) firms are small with suspended share trading, about 50 companies impacted are larger companies and are in BSE top 500," said the second person cited earlier.

The names include some that are similar to those of prominent politicians and businessmen, including non-resident Indians. Mint couldn’t ascertain whether these directors were indeed public figures.

Even the exchanges are facing this difficulty “as in some cases there are only names and not the director identification number or DIN for clear identification", said the second person cited earlier.

“In some cases the names look familiar but DIN is not readily available for clear identification. In some cases the concerned director had stepped down from the company about seven years back so he/she cannot be associated with company," added this person.

Such directors are being encouraged to approach the MCA for a clarification, he added.

“Any action on directors of unlisted companies could have a spillover impact on the listed company space if they share common directors. While the Companies Act is seemingly ambiguous on whether these disqualified directors can continue to hold other functioning directorships, if and when these directors are asked to vacate their offices, it will step up demand for qualified directors from here on," said Nikhil Bedi, leader (forensic practice), Deloitte India.