RCom shares plunged to a record low of Rs25.30 before gaining some ground to close at Rs25.85, down 7.7% from their previous close. India’s benchmark index, Sensex, closed down 0.21%. Other group stocks did not fare much better. Reliance Defence and Engineering Ltd fell 7.88% while Reliance Infrastructure Ltd shares were down 6.46%. RCom shares have now lost 21.8% in the last 10 trading sessions. On 5 May, ratings agency Icra Ltd downgraded RCom’s debt and subsequently, on 19 May, CARE Ltd also cut its ratings on several debt instruments, citing the competitive landscape in the telecom industry.

The fall in RCom shares on Wednesday was accentuated by a sharp fall in the prices of its bonds in Hong Kong. That prompted a clarification by the firm to stock exchanges that it has made timely half-yearly payments on these notes and would continue to do so, which led to the bonds erasing their losses subsequently.

On Tuesday, Debtwire, a financial intelligence service, ran a story that RCom was exploring fresh payment options with creditors and has asked them to wait for payment until it completes the spin-off of its wireless services business and the separate sale of its tower business, Bloomberg reported.

The firm has signed a non-binding agreement to sell its tower business to Brookfield Infrastructure Group. It has also announced a merger with Aircel Ltd. 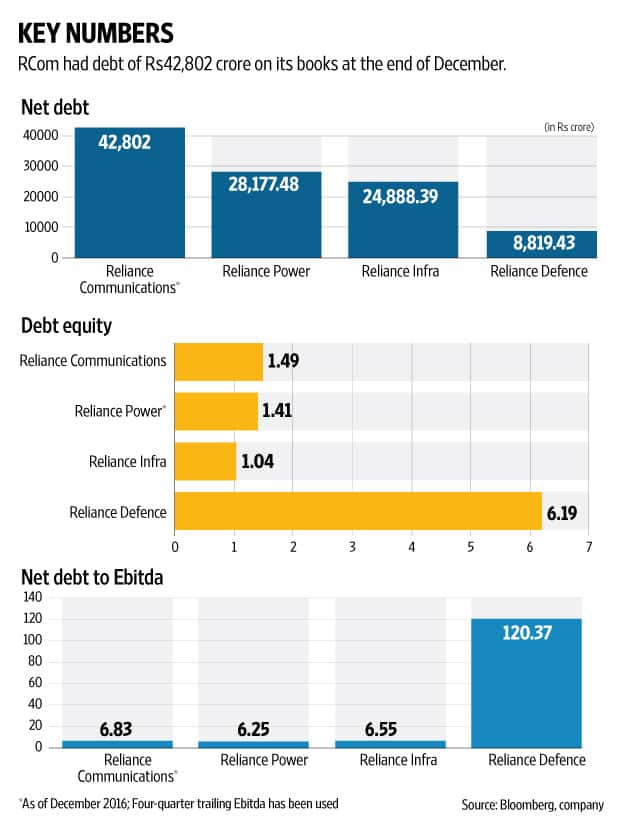 Officials at two Indian state-owned lenders which have exposure to RCom debt said the company has been servicing debt regularly. They spoke on condition of anonymity.

“After the non-performing (NPA) ordinance, stocks of most debt-laden companies had rallied in anticipation of relief. But as the central bank firms up plans to deal with the loan problems, it seems that these defaulters will have to bear a share of the pain," he said.

RCom had debt of Rs42,802 crore on its books at the end of December.

In the nine months to December, the firm reported a 26.5% decline in its earnings before interest, taxes, depreciation and amortization (Ebitda).

Four analysts tracked by Bloomberg have predicted that the firm will post a net loss of Rs886 crore for the quarter ended 31 March. Earnings are due on 27 May.

Analysts say the telco is likely to continue its poor performance due to increased competition in the sector.

“With increased competition, we are anticipating continued poor performance from the company, which in turn will create some pressure on servicing debt," said Sundar Sanmukhani, head of fundamental research at Choice Broking. “However, any strategic decision on a stake sale and/or merger will act as a positive trigger for the share price."