No big bang in Budget 2015, but taxpayers get enough incentives

The proposed budget has many incentives to boost savings, retirement planning and health insurance

After giving relief to taxpayers in the July 2014 budget by raising the exemption and deduction limits, finance minister Arun Jaitley took the next logical step in 2015 of incentivizing financial savings and making investment for retirement more attractive.

The budget has also given incentives for health insurance, talked about grievance redressal in the financial sector, abolished the wealth tax and raised the surcharge for the super-rich by 2 percentage points. The decision to abolish wealth tax was taken considering the high cost involved in its collection. The effective income tax rate after the hike in surcharge on the super-rich will now be 34.6% compared with 33.99% till this fiscal (see table). Here’s how specific proposals will affect your money management.

The budget has increased the deduction on health insurance premium under section 80D of the Income-tax Act from 15,000 to 25,000. For senior citizens, it has been increased from 20,000 to 30,000. A hike of 10,000 saves 3,090 in taxes. “Medical inflation has made healthcare expensive and people need to buy higher covers. A hike in deduction will incentivize that," said Antony Jacob, chief executive officer, Apollo Munich Health Insurance Co. Ltd. This overall deduction limit is inclusive of the 5,000 deductions allowed for preventive check-ups. The budget has also catered to the needs of very senior citizens, 80 years and above, who may find it difficult to get health insurance at this age. They will get a deduction of 30,000 if they are not covered by health insurance, towards expenditure incurred on their treatment.

The deduction limit for treatment of specified critical ailments or expenditure on account of disability has also been increased.

To move investments from gold to financial assets, sovereign gold bond will be launched. These bonds will carry a fixed rate of interest and will be redeemable in cash at the value of gold at the time of redemption. At a broader level, the idea is to restrict gold imports, which affect external finances. For example, a high current account deficit hurt the Indian economy and the rupee severely in the second half of 2013. The result was import curbs on gold.

The other proposal to attract savings into financial assets is re-introduction of tax-free bonds. This will also serve a larger purpose of boosting infrastructure spending. These bonds are long-term in nature with maturity periods up to 20 years. Interest earned is tax-free for the holder. 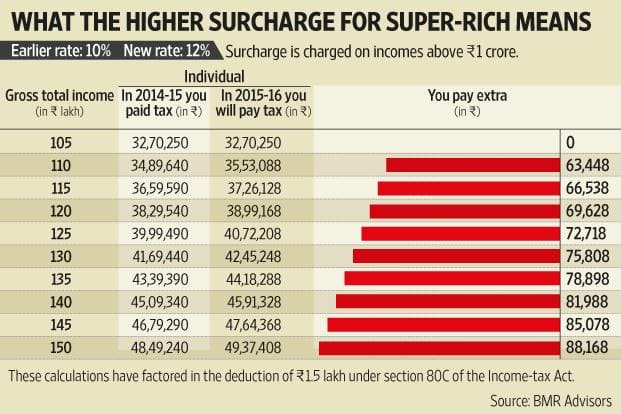 Be better prepared for retirement

India has a relatively young population, but it will age and it is important to have adequate pension cover. And the budget has incentivized individuals to think about pensions seriously. There are two important developments in that direction. The first is that salaried individuals, who were till now putting 12% of their salary in the Employees’ Provident Fund (EPF) account by default, will now have the choice between investing in EPF or the National Pension System (NPS). While both the schemes are defined contribution schemes, returns depend on the amount you contribute and the performance of the fund. EPF invests in debt instruments and NPS gives you an option to invest in equities to some extent. The budget has not given a timeline as to when this facility would start to roll, but it would require certain changes in the system to enable companies to seamlessly offer both the options to their employees. “The move of giving a choice is a very interesting boost to the entire NPS programme. NPS is managed somewhat better and is more efficient than EPF. It’s a better investment and saving mechanism," said Anandorup Ghose, rewards practice leader, Aon Hewitt India. The other change announced was an increase in the deduction limit on pension plans offered by a life insurance company and the NPS from 1 lakh to 1.5 lakh. This actually corrects the existing anomaly wherein other products under 80C have a deduction limit of 1.5 lakh. Additionally, to push investments into the NPS, the budget gave an additional deduction of 50,000. As per section 80CCD, 10% of your salary contributed to NPS, is eligible for a tax deduction up to 1.5 lakh now. The additional 50,000 takes the benefit to 2 lakh. This would take total savings to 61,800 for someone in the 30.9% tax bracket.

However, the service tax has gone up from 12.36% to 14% which will have an impact on financial services. “The increase in service tax rate will have a marginal impact on all financial products that attract service tax," said Rakesh Nangia, chartered accountant and managing partner, Nangia & Co.

All your complaints will be heard at one place

The budget has said that the government will put in place a mechanism that would set up a financial redress agency across all financial sector regulators to address investor grievances. It is part of a larger move to set up the Indian Financial Code (IFC) that aims to rewrite the existing financial laws across different sectors and bring more harmony, thus reducing any gaps and arbitrage. One of IFC’s pillars is consumer protection and the financial redress agency is an institution that would be an enabler. Existing redressal mechanisms are run by separate regulators, such as Sebi’s Complaints Redress System or the Reserve Bank of India’s Banking Ombudsman, which may be disbanded.

“It should not be a customer’s botheration to figure out which regulator she should go to. Today, if a customer is mis-sold an insurance policy by a bank, where should she go? Besides, the customer may be in a city where there could be a banking ombudsman but another regulator’s office may not be there," said Ajay Shah, professor, National Institute and Public Finance and Policy. The presence of a financial redress agency across India should solve many logistical issues that come with filing a complaint, he added. “It will be fast (shorter turnaround time), lightweight (lesser documentation and legal requirements) and intuitive to the customer’s concerns," said Shah, who co-headed the research team that supported Justice Srikrishna’s commission on the Financial Sector Legislative Reforms Commission that laid down the roadmap of the IFC.