Their fortunes swung sharply in June quarter, largely because of the rush of stock sales through QIP route

Mumbai: Home-grown investment banks (i-banks) have triumphed over “bulge bracket" foreign rivals, bagging most of the business for advising clients on equity sales in the fiscal first quarter as companies rushed to raise money to take advantage of a stock rally after the Narendra Modi-led government assumed power in May.

Fortunes of local investment banks swung sharply in the June quarter, largely because of the rush of stock sales through the qualified institutional placement (QIP) route. Most Wall Street investment banks, the so-called bulge-bracket firms, have cut the number of employees in their equity sales teams in India after years of lull in capital raising, leaving them ill-prepared for the sudden burst of activity.

There have been six QIPs raising ₹ 12,217 crore in the three months ended 30 June, compared with ₹ 1,222 crore raised in the same quarter last year, according to Prime Database, which tracks the primary market. Many more companies are planning to raise money.

Lavasa, Imagica Adlabs, Café Coffee Day and Ratnakar Bank are among the companies that are preparing to sell stock to the public for the first time.

“In the last four years, domestic investment banks remained committed despite unsuitable market conditions. They have continued to strengthen their research and distribution network as against foreign banks that have been scaling down," said Khemani. 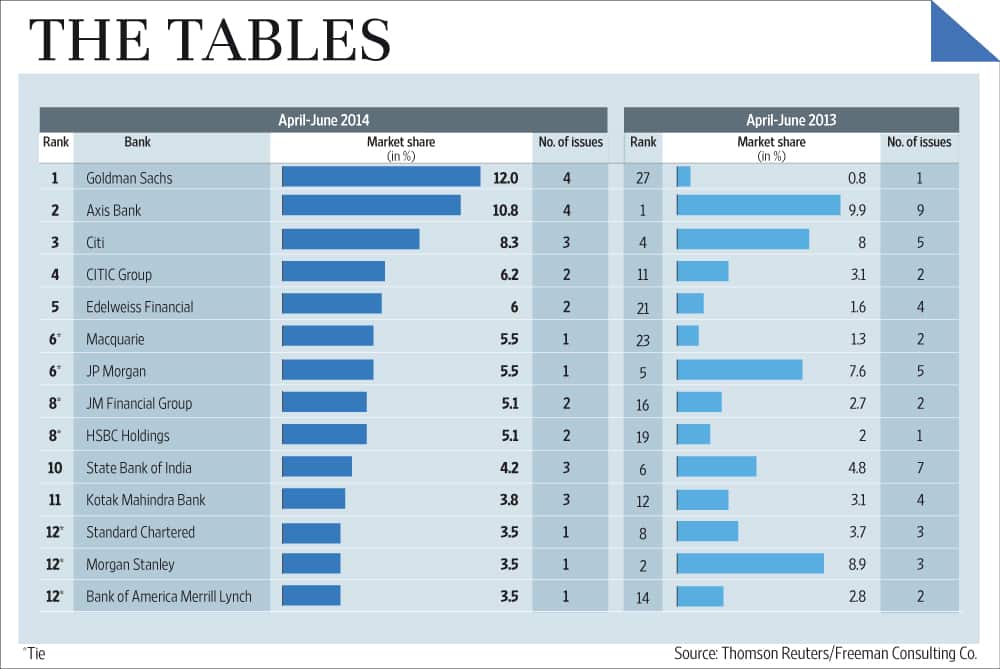 Unsurprisingly, Edelweiss rose to the fifth spot in the June quarter equity league tables, from the 21st position that it held in the year earlier, according to data compiled by Reuters.

Mumbai-based JM Financial Ltd climbed to the eighth spot from 16th in the year-ago period. Motilal Oswal Financial Services Ltd moved up by 17 spots to occupy the 15th place in the league table. Motilal Oswal shares the same spot as leading foreign banks such as Deutsche Bank PBC India and UBS AG, which occupied third and 13th spots during the corresponding period of 2013, respectively.

Even marquee foreign investment banks have slipped. Morgan Stanley has slipped from second spot to 12th. Deutsche Bank, which was placed third, now occupies the 15th slot. Barring Goldman Sachs and Macquarie Group Ltd, which saw a sharp rise in their rankings, most foreign investment banks have slipped or have seen a marginal rise in their rankings. Goldman Sachs was an exception, moving to the first spot from 27th earlier.

In the last three years, foreign investment banks have cut about 30% workforce in equity sales, 50% in mergers and acquisition advisory and 20% in proprietary trading verticals, according to R. Suresh, managing director at RGF Executive Search.

For instance, in January 2012, Royal Bank of Scotland Group Plc decided to exit its cash equities, equity capital markets and mergers and acquisitions businesses, leading to 42 employees being fired in India.

“Those banks that have been in touch with their clients on a regular basis despite the subdued markets in the last few years are the ones who will win the initial mandates as markets revive," said Sanjay Bajaj, managing director and head for equity capital markets at HSBC India. HSBC moved up from 19th spot to eighth.

A senior official from a bulge-bracket foreign bank said most foreign banks are now focusing on debt placements for “high-quality and high-yielding" clients, rather than equity issues. He requested anonymity.

In contrast, Indian investment banks did not cut back and were quick to capture the sudden turn in the market mood and the surge in equity issuances.

“The Indian investment banks have retained their commitment to the Indian market and hence are better equipped to manage the equity issuances that are in the pipeline," said V. Jayasankar, senior executive director and head of equity capital markets, Kotak Investment Banking.

Domestic investment banks have also seen an increase in the fees that they have generated from recent equity issues. Overall, fee share of domestic banks rose to 36% against 29% a year ago, according to Reuters.

Part of this is because of the profile of companies that are raising equity. In the last two months, several debt-laden companies and firms from sectors that have been out of favour with investors have taken the QIP route. Telecom companies Idea Cellular Ltd and Reliance Communications Ltd raised money during the quarter.

Firms that are tougher tosell to investors generatehigher fees for banks, said bankers.

“The investors have to be convinced about the underlying value of the assets in the company they are investing. Tougher sell converts into a higher fee," said the foreign bank official cited above.