New York: US stocks fell modestly on Thursday to close out the worst month since September as investor sentiment sank on Europe’s deepening credit problems. 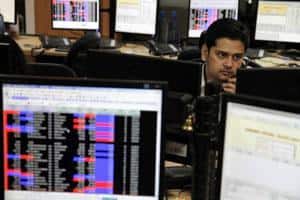 Spain was at the center of the latest European developments as markets judged Madrid’s government would sooner or later have to ask for outside help for its banks. A report, later denied, of possible plans to assist Spain with its troubled banks helped Wall Street nearly erase losses of 1% in the afternoon.

Market participants cited month-end rebalancing as also supporting stocks due to money managers buying more shares to make up for the declining value of equities during May.

However, the continuing worry over Europe and a batch of disappointing US economic figures weighed on the market. Jobless claims rose for the seventh week in eight, putting investors on edge before Friday’s US monthly payrolls report.

“Europe is the main issue, no question about it, but you have a supporting cast from the US data," said Paul Zemsky, head of asset allocation at ING Investment Management in New York.

Commodity prices fell with the euro at 23-month lows against the US dollar. The greenback weakened sharply versus the yen, a sign that investors were moving money into perceived safe havens.

A disappointing number in Friday’s report would further damp market sentiment, but it could also bring back talk of further stimulus by the US Federal Reserve.

Shares of TJX Cos rose 2.7% to $42.46 after the low-price retailer was among those to report sales at stores open at least a year that beat Wall Street forecasts.

Facebook Inc shares hit a fresh intraday low of $26.83 before bouncing back to close up 5% at $29.60. The social networking company has fallen in six of its nine trading sessions.

In other data, the Commerce Department said first-quarter economic growth in the United States was slightly slower than initially thought and the Institute for Supply Management-Chicago business barometer fell in April to its lowest level since September 2009.

Almost 8 billion shares changed hands on the New York Stock Exchange, the Nasdaq and Amex, sharply above the daily average of 6.83 billion so far this year.

Declining issues beat advancing issues on the NYSE by 1552 to 1430 while on the Nasdaq 13 issues fell for every 12 that rose.