While HDFC has denied any interest in PNB Housing Finance, the latter's pristine loan book with very little delinquency makes it a good buy for any investor

Shares of housing finance companies haven’t been shining in the current year and PNB Housing Finance Ltd has been no different.

Concerns over compressing spreads have pulled down shares of most mortgage lenders from their highs in 2017. Investors have taken note that the stellar growth in loan books in the previous fiscal year is unlikely to get repeated.

But PNB Housing Finance’s stock has got a booster shot on reports that mortgage king Housing Development Finance Corp. Ltd (HDFC) and Kotak Mahindra Bank Ltd are jostling to buy a controlling stake in it, although the company and HDFC have denied having any talks on stake sale. 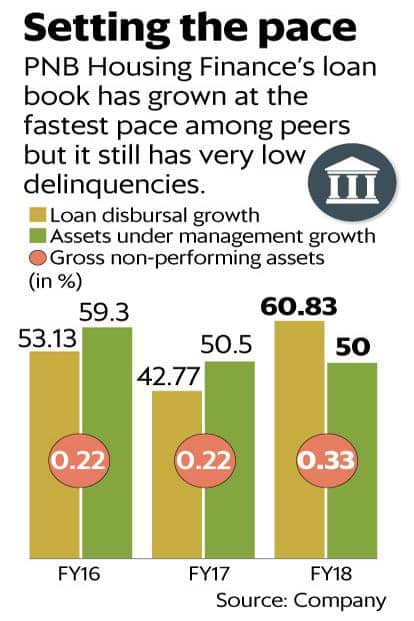 That said, it is known that two of the biggest shareholders want an exit from the lender. Hamstrung on capital, parent Punjab National Bank (PNB) is holding a fire sale of non-core assets and stakes in subsidiaries, one of them being the housing finance arm. The other significant shareholder Carlyle Group too wants to exit.

On the block is a 66% stake in PNB Housing Finance and it is not a stretch to believe that investors are salivating at the prospect. After all, who would not want to buy a slice of the fastest-growing and also safest mortgage market? Especially when the government is going out on a limb to boost the real estate market by making it more affordable.

So what will an investor be getting into?

A pristine loan book that has grown by 48% in FY18 and a mere 0.6% of delinquency. While affordable housing may have cooled down a bit, it is still a promising growth corner of the real estate market. Affordable housing loans are 20% of PNB Housing Finance’s individual loans.

Analysts believe current valuations are attractive given a superior loan book. The PNB Housing Finance stock has dropped 29% from its all-time high.

In November 2016, the lender got listed at a cool valuation of over five times its book value for that year. But multiples have been tempered and the stock trades now around 2.7 times its estimated book value for FY19. The promoter’s desperation to sell could temper valuations some more.