How to top up your health insurance plan

How to top up your health insurance plan

On average, the health cover people take is between ₹ 1 lakh and ₹ 3 lakh. For minor hospitalization or surgery, this amount may be sufficient but what if there’s something serious? A massive heart attack can cost up to ₹ 5 lakh and a serious accident can burn a huge hole in your pocket. Therefore, as health costs soar, you need to review your health insurance needs and cover any shortfall. 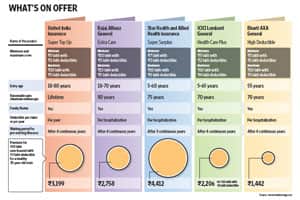 Sample Bajaj Allianz General Insurance Co. Ltd’s Extra Care, a top-up health insurance policy. For a sum insured of ₹ 10 lakh and a deductible of ₹ 3 lakh, the policy charges ₹ 2,500 from a 30-year-old. But for Health Guard, their regular indemnity policy, the premium is ₹ 10,913 for a sum assured of ₹ 10 lakh. Says Mahavir Chopra, head (e-business and retail), Medimanage.com, a health insurance portal: “With year-on-year healthcare inflation at 16-20%, a top-up policy is a low-cost investment, which will pay great dividends in the long run."

Top-up policies come as individual and floater plans. A floater plan covers more than one individual in a family and considers the number of people covered as one unit. So if one member of the family invokes the cover, the sum insured reduces by that much on the rest of the family for that year.

Also, top-up plans cover only “single incidence hospitalization". In other words, if your hospital bill exceeds the deductible during a single incident of hospitalization, only then does the top-up plan gets triggered. For example, if a person gets hospitalized and needs to cough up ₹ 5 lakh, a basic top-up plan of ₹ 3 lakh deductible will cover the difference of ₹ 2 lakh. But in a year, if he gets hospitalized twice and the first time it costs him ₹ 2.5 lakh and ₹ 2 lakh the second time, or in the case of a floater plan where two members get hospitalized with individual bills of ₹ 2.5 lakh each, the top-up plan will not get triggered at all. Even as collectively the bill overshoots the limit of ₹ 3 lakh, individually they are well within the deductible limit.

When do they make sense? Top-up plans make a lot of sense if you have a comfortable base. Says Chopra: “Top-ups are being mis-sold as an immediate extension cover of an existing cover. But the most important factor that people are unaware of is that the threshold or deductible triggers only when the cost of single hospitalization goes above the threshold. Hence, in our opinion, one should have a comfortable core cover for the family and a top-up to extend the cover."

In fact, top covers are cost effective the most when the deductible is high. You can afford a higher deductible when your basic cover is decent. Sample this: For a deductible of ₹ 2 lakh and a top-up cover of ₹ 5 lakh, a 35-year-old will need to pay ₹ 4,412. Increase the deductible to ₹ 4 lakh and the top-up cover to ₹ 10 lakh and the premium actually comes down to ₹ 2,206. So in the first case, if the person had a regular health insurance policy of ₹ 2 lakh, he would have to shell out ₹ 10,289 for both the plans for a cover of ₹ 7 lakh. In the latter case, the collective cover of ₹ 14 lakh would come for ₹ 11,977, ₹ 7 lakh worth of extra cover would come for ₹ 689 more.

Defined benefit plans: The market does not stop at indemnity policies alone. Health insurance plans that have a defined benefit are equally popular. Since the benefits under these plans are defined, they usually work well as income supplement products.

But if you have enough savings or sufficient health insurance, you could give other defined benefit plans, including hospital cash that pays daily cash during hospitalization or major surgical benefit that pays a lump sum on major surgical procedures a miss.

To make top-up plans work in your favour, ensure you have a comfortable base. In assessing your base, don’t just bank on the health insurance policy provided by your employer. If you switch jobs, you will lose that. Also, with portability becoming a reality, if you are a healthy individual, you can consider porting your employer’s policy to an individual one when changing jobs.