Indian Bank reported a 59% fall in net profit to Rs132 crore, missing consensus estimates by a mile, even as its toxic assets rose 68% from a year ago to Rs1,546 crore

South-based Indian Bank, regarded as one of the better performing public sector banks, reported a nasty rise in its bad loans for the fourth quarter, shaking the confidence of investors and driving the stock down a massive 8%.

The lender reported a 59% fall in net profit to Rs132 crore, missing consensus estimates by a mile.

A Bloomberg survey of analysts had pegged profit at Rs290 crore. The obvious culprit was higher provisions towards toxic assets which rose 68% from a year ago to Rs1,546 crore. 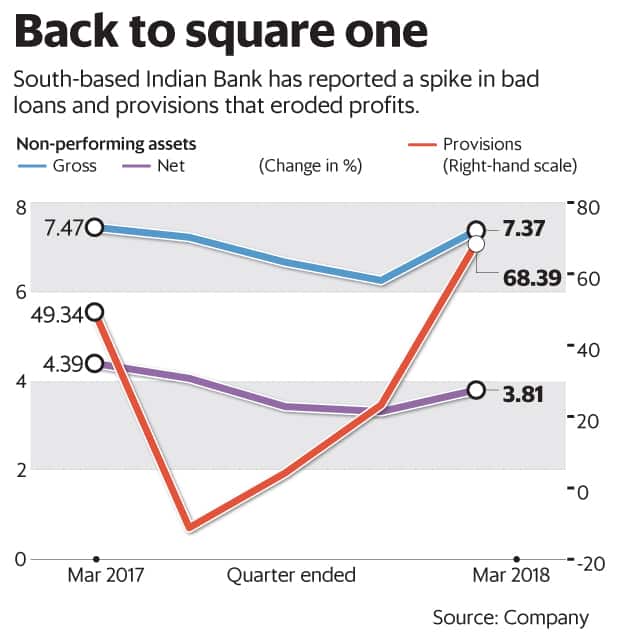 The provisioning pain was somewhat expected, as the Reserve Bank of India had put an end to all forbearance schemes that allowed banks to classify a restructured loan as standard.

The Chennai-based Indian Bank had to provide Rs368.79 crore because of the end of forbearance. It had to provide another Rs54 crore towards accounts referred under the Insolvency and Bankruptcy Code.

With this provisioning hit and bad loan accretion, it is back to square one for Indian Bank, after consistently improving for the past three quarters on asset quality. No wonder investors punished the stock after having driven it up roughly 35% during the first nine months of fiscal year 2018 (FY18) in response to its performance.

But there are some positives to look forward to.

The core operating performance of the bank offers some cheer as net interest income grew at a robust 18.25%, while operating profit rose 8.75%. Loan growth at 24% led by loans to small businesses was also a positive metric.

The thrust of the government in financing the micro, small and medium enterprises is likely to rub off on lenders like Indian Bank in the coming quarters.

Moreover, the bank has learnt its lesson and ramped up provisioning over the year. Its provision coverage ratio has improved to 64% from about 56% a year back. Therefore, net non-performing assets ratio is down sharply from a year ago.

Indian Bank’s stock trades at a discount to its estimated book value for FY19 and most analysts still have a buy rating on it.