Telcos and the tiresome overhang of Reliance Jio’s launch

Shares Bharti Airtel and those of Idea Cellular have dropped 14.7% from their respective highs about a month ago. What has changed in the past month?

The shares of both Bharti Airtel Ltd and those of Idea Cellular Ltd have dropped 14.7% from their respective highs about a month ago. Collectively, they have lost nearly $5.5 billion in the value of their equity. What has changed in the past month?

“Nothing much," says an analyst with a domestic institutional brokerage firm, “but if you want to be really cynical about these companies’ prospects, we are one month closer to the launch of Reliance Jio Infocomm Ltd." To be sure, Jio’s upcoming launch, now expected by the end of this year, has been an overhang on telecom stocks for a tiresomely long time. One would have expected that investors had priced in this event risk a long while ago. True, Jio’s plans have become clearer recently; but there has been hardly any doubt that it would go for a big launch with large coverage at an attractive price point. Besides, as pointed out in this column earlier in the month, Bharti Airtel has stolen a march over Jio by starting its own 4G services about three months ahead of the latter’s planned launch. Its results for the June quarter were also fairly decent.

The pessimism surrounding Bharti Airtel’s shares, therefore, looks a bit overdone. In Idea Cellular’s case, however, it has become increasingly clear that investors’ exuberance at the time of the spectrum auctions in March was over the top. Between early March and mid-April, Idea’s shares had risen by over 35%, with investors being relieved that the company had secured adequate spectrum for its future growth plan. (Is irrational exuberance driving Idea Cellular shares?) 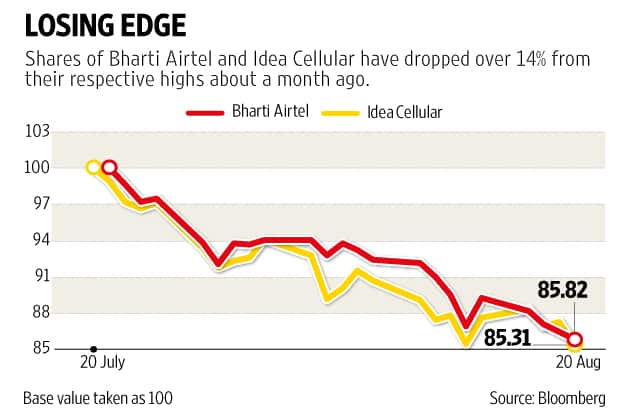 Idea Cellular shares have given up nearly all of those gains now, which makes sense, as the spectrum purchases also led to a monumental build-up of debt. The company’s June quarter results announcement was accompanied by a statement that the company will increase its capex this year by about ₹ 1,000 crore. One way to look at this is that the company is willing to make necessary investments for future growth, but another is that debt and financial costs will be higher than earlier anticipated. But the main factor that distinguishes Bharti Airtel from Idea Cellular is that the former is far ahead in terms of its 4G plans, especially in terms of the spectrum it has already acquired for these services.

It’s not that Idea Cellular can’t play catch up—after all, new spectrum will be auctioned soon. But again, given some of the above-mentioned headwinds, some of the caution looks warranted.