The domestic output is expected to increase, similar to expectations on the global front

Coffee prices, especially of the Arabica variety, have been declining in 2012, and the trend continued in November as well. The International Coffee Organization’s (ICO’s) composite price indicator for November fell by 7.3% over the previous month, and the index—at 134.4 cents per pound (around ₹ 74 today per 455g)—is at a level last seen in 2010.

Robusta dominates the Indian coffee scene, contributing to 68% of the total output. In 2012 so far, the ICO indicative price for Robusta is up by 1%, compared with a 35% decline in the more expensive Arabica. 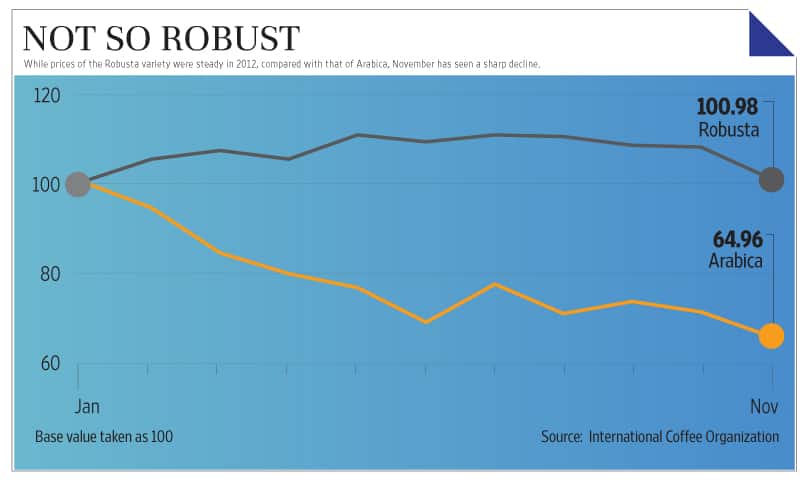 The projected increase in the domestic coffee output should normally see coffee growers benefit from higher volume sales. But if the fall in Robusta prices accelerates, it will undo some of the good done by the increase in output.

ICO expects world consumption to remain buoyant in 2012-13, and the market can move into a surplus situation if the estimated growth in production is attained. ICO expects the impact of the surplus on coffee prices to be modest, since several producing countries will need to replenish stocks. But in November, the pressure on prices was quite visible.

Despite an increase in output, India’s coffee exports have declined by 8.1% in the January-November period. Though Arabica prices fell sharply, exports of this variety have risen by 7.1% compared with the 16% decline seen in Robusta. The decline could be attributable to better domestic realizations, resulting in higher local sales. Domestic sales would also have been helped by the depreciating rupee.

If the downtrend in Robusta coffee prices is sustained, it can have a negative impact on coffee growers, such as Tata Coffee Ltd and CCL Products India Ltd, as they will see realizations dip. An increase in output will no doubt help improve volume sales, but margins could get affected. The next few months should give a clearer picture of whether the November price decline was an aberration. If prices continue to slide, however, instant coffee marketers such as Nestlé India Ltd and Hindustan Unilever Ltd will benefit.