Home / Market / Mark-to-market /  The flip side of GST: its impact on the informal economy
Back
Share Via

The flip side of GST: its impact on the informal economy

The markets are gung-ho about the shift to the goods and services tax (GST). One factor driving this optimism is the anticipated shift of business from small, unorganized firms in some sectors to organized ones. Since the latter are already in the formal economy, comply with regulations, are generally larger in size and pay taxes, the switch will be much easier for them, which will ultimately translate into increased market share.

Analysts have been preparing lists of companies that will benefit in sectors such as apparel, tiles and sanitaryware, plywood, textile, footwear, electrical equipment and appliances, and plastics and packaging. All these sectors have a high composition of unorganized firms (see chart).

For example, analysts expect the share of the informal segment in the tiles industry to decline from 40% currently to 20%. Similarly, nearly 60% of the ready-mixed concrete market is unorganized. In the light electrical segment, more than 35% of the businesses are in the informal sector. Certainly, this augurs well for larger companies in the organized sector. This also comes at a time when volume growth has just recovered from the effects of demonetisation and corporate India is desperate for a much-awaited earnings recovery. 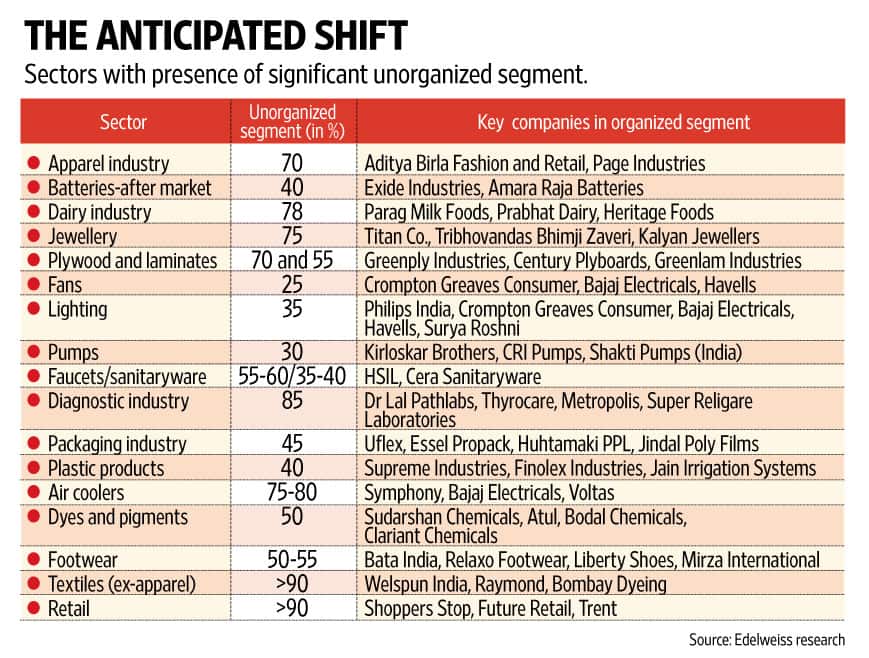 But the gain in market share of listed companies means a corresponding fall in the share of units operating in the informal economy. GST is sure to take a toll on the financial health of small- and medium-sized enterprises (SMEs) operating in these sectors. Economists say that the informal or unorganized sector accounts for nearly 50% of India’s gross domestic product and is responsible for more than 80% of total job creation in the country.

Many of the firms operating in this part of the economy make profits largely due to tax evasion and non-compliance with regulatory norms, which allows them to offer products at comparatively lower prices. However, in the GST-era, it will be a struggle for survival for such firms because they will be faced with taxes, lower margins and a sharp spike in the cost of compliance. Some firms in the unorganized sector may go under, while others could find their profits curtailed. To be sure, in some instances the two sets of companies cater to different customers, but there is always some overlap. And it is not just the manufacturers in the informal economy who will suffer but also the smaller dealers and wholesalers.

The economics of logistics under the GST regime also favour large companies in the organized sector.

A final decision on e-way bills, which will have a significant impact on the logistics sector and logistics cost of manufacturers, is pending. When implemented, this should result in a decline in transit time due to elimination of multiple checkpoints and consolidation of warehouses. This will aid large companies that operate across India and offset some of the cost advantages that regional and small firms, usually those in the unorganized sector, enjoy.

The point is that the squeeze on the informal economy may well lead to job losses, which could then start hurting demand. So while companies in the organized sector could benefit, there could be distress in the informal economy. Indeed, the situation could be a repeat of what happened during demonetization, when the informal sector was the hardest hit.

The move to the new tax regime has the potential to cause immense disruption to the shadow economy that is the source of livelihood for many, although it is nobody’s case that firms that survive by flouting regulations and evade taxes continue to do so.

With the 1 July deadline around the corner, there are many SMEs who are ill-prepared for the transition. Those of them who fail to make it on time will be out of business, thus leading to increase in unemployment, at least initially, caution analysts.

The switch to GST will increase the size of the formal part of the economy and increase productivity, but it will also extract a cost from the most vulnerable firms and workers.