The best guesses on why bitcoin prices are declining

After crossing the $20,000-mark, the bitcoin prices have tumbled and are now hovering around the $10,000 levels

In December 2017, bitcoin touched an all-time high and crossed the $18,500-mark. At that time, cryptocurrency experts predicted that it would cross the $20,000 mark. However, since then prices have tumbled and are now hovering around the $10,000 levels. Since the new high, there has been a steep correction in the prices. Here is why.

Bitcoin experts say that a price correction was expected, as the steep increase was euphoric and in fact prices are likely to come down below the $10,000 level. “Last year, price increase was quite sharp. It was mainly euphoric in nature. The price was completely driven by news announcements. This correction was expected and I expect the prices are set to further come down to $8,000 to $9,000 levels," said Praveen Kumar, chairman and chief executive officer of Belfrics Global SDH, a company that runs bitcoin exchanges in Singapore, Malaysia, Bahrain, Japan, Kenya, Nigeria, Tanzania and India. 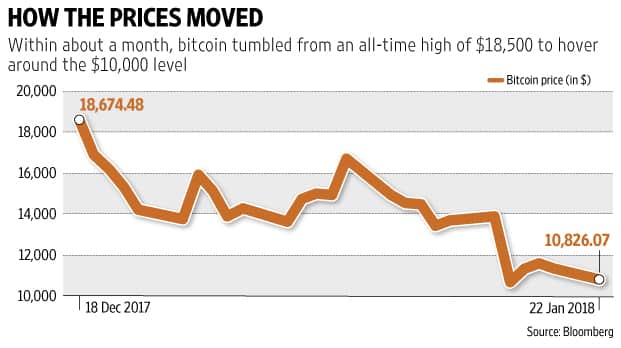 Also, currently the new investors are either staying away from bitcoin or are investing only in smaller amounts. “The newcomers who are buying bitcoin are trying it out with smaller amounts, compared with those that came in last year. For instance, beginning of last year, the new investor came in with an average investment amount of Rs5-10 lakh. But now it is around Rs60,000 to Rs1.5 lakh. The confidence level is also down," said Kumar.

Experts also attribute the correction in prices to the income tax department’s survey of bitcoin exchanges, which took place on 14 December 2017. “I think there is some sense of worry among users. I have seen a lull post the income tax survey. Either the users are being extra cautious while trading or they are sceptical. Also, when such things happen, there are rumours and users are wondering what the next stance is going to be. There is also a sense of insecurity," Jincy Samuel, chief operating officer, Coinsecure, a bitcoin exchange company.

Compared with global bitcoin prices, bitcoins in India are priced at a 30% premium. “Globally, prices didn’t touch the $20,000 mark. In India, it reached as high as Rs19 lakh. This drew a lot of attention. Usually, the prices in India are at a 30% premium. But there have also been times when the prices in India have been cheaper than those in the global market. However, there is no definite answer to the price change," said Samuel.

Bitcoin prices have seen a gradual increase in the last 5-6 years. However, the way prices moved in 2017 was exceptional. It didn’t follow the trend of previous years. Also, there has been a dip in the overall volume due to operational issues and the developments after the income tax survey in India. Bitcoin prices are extremely volatile. And, the bitcoin prices are not backed by fundamentals or sovereign guarantees, and therefore they ride primarily on investor sentiments. If you are putting your money in bitcoins, be sure to tread with caution.

Subscribe to Mint Newsletters
* Enter a valid email
* Thank you for subscribing to our newsletter.
Topics
crypto-money mint-india-wire
First article
Close
Recommended For You
Feedback
Select your Category
Your Message
No Network
Server Issue
Internet Not Available