PIPE deals fall sharply in first half of 2016

For the first time since the Narendra Modi-led government came to power in May 2014, private investments in public equity, usually known as PIPE deals, have witnessed a decline.

According to data available from Venture Intelligence, a research service focused on private company financials, during May-June 2016, PE funds invested $154 million in public equities, the lowest amount since April-June 2014 when PEs invested $205 million. 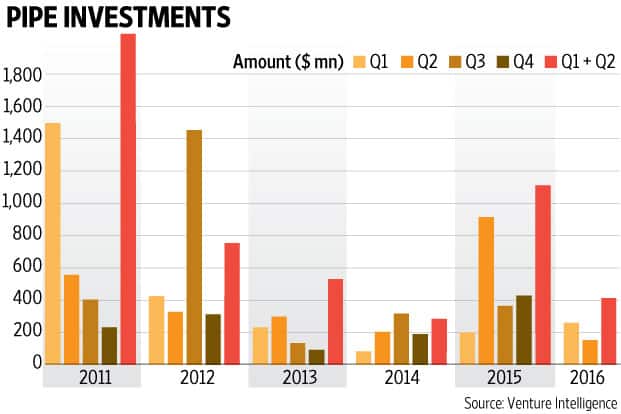 One reason for this may be the fact that valuations in a number of sectors are looking stretched.

“Some of the sectors which private equity funds like are healthcare, consumer and financial services where valuations have run up significantly. Since last year, valuations have run up, especially for the healthcare segment, making these stocks expensive, thus investors are waiting for price adjustments to happen coupled with global uncertainty," said Vikram Utamsingh, co-head of adviser Alvarez & Marsal’s India operations.

Utamsingh, however, added that the desire to invest in Indian equities hasn’t faded and more transactions are expected during the later part of the year as deals are taking time to close.

Since January this year, PEs have invested $414 million through PIPE deals, as compared to $1.12 billion during the corresponding period last year, a significant drop of 63%. In fact, except for 2014, when investors were in wait-and-watch mode ahead of the elections, the numbers are lowest in the last five years.

The lower year-on-year growth rate is also because of a high base from last year when a number of large deals took place.

Last year, the surge was led by bulge-bracket investors, including Singapore’s state-owned investment firm Temasek Holdings Pte. Ltd, Bain Capital Llc and KKR India Advisors Pvt. Ltd investing in listed firms. Each of them had deployed at least $100 million in such deals.

This year most of these large funds haven’t participated in any significant transaction yet.

Also, last year, PEs had bought shares of public companies while participating in their qualified institutional placement (QIP) program. 20 firms had raised $1.96 billion during the first six months of 2015, whereas this year, merely four firms have managed to raise $78.39 million from January to June. Malaysian private equity firm Creador Capital, which is on road to raise a target corpus of $450 million, has invested $19 million to acquire a little less than 2% stake in City Union Bank Ltd in March.

“Companies are delaying new capex plans and they are being cautious in new customer acquisitions. In general, there is a slowdown in the market and people are waiting for demand to revive before they start raising further capital," said Anand Narayan, senior managing director at Creador Advisors India.