Global demand for gold slipped 9% to 915 tonnes during the third quarter of 2017 compared to the same period last year, says a World Gold Council report

Mumbai: Global demand for gold slipped 9% to 915 tonnes during the third quarter of 2017 compared to the same period last year, an eight-year low, said a World Gold Council report. It has dipped 12% so far in 2017. The gold demand trends report said that the fall was due to weak demand in the jewellery sector and significantly lower inflows into exchange-traded funds.

“A weak quarter in India was the main reason for year-on-year decline in global demand. The new goods and service tax regime deterred consumers, as did new anti-money laundering regulations governing jewellery retail transactions," said the report released on Thursday.

Demand for gold in India for the three months ending September was at 145.9 tonnes, down 24% from the year-ago quarter’s 192.8 tonnes.

After three consecutive quarters of growth, demand for gold jewellery fell by 25% year-on-year to 114.9 tonnes in the third quarter of 2017.

It said that recovery in Indian jewellery demand in the first half of 2017 was derailed in July-September due to implementation of GST in July, followed by a further blow when the government brought the gems and jewellery industry under the umbrella of the Prevention of Money Laundering Act (PMLA) in late August. 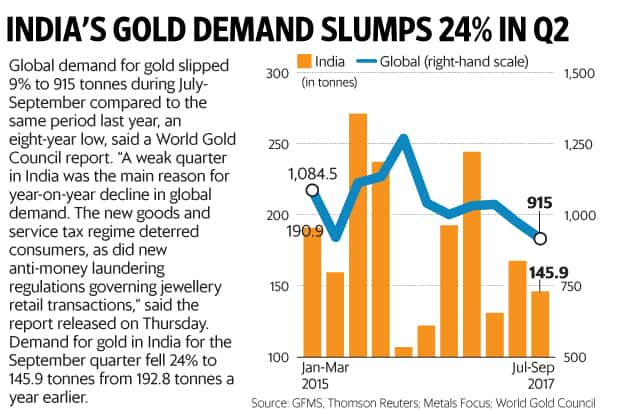 Demand, therefore, remained under pressure, particularly in rural India. However, consumer sentiment improved after PMLA was lifted from gems and jewellery sector in early October ahead of Diwali, but festive demand did not pick up due to GST constraints.

Somasundaram PR, Managing Director, India, World Gold Council said, “Headwinds for demand continue though, following various measures since early 2016 to boost transparency, and therefore we expect full year demand in 2017 to be well below five-year average, our estimate being between 650 to 750 tonnes, the lower end of the range being more likely."

Meanwhile, investment demand for gold was down 28% year-on-year at 241.2 tonnes as ETF inflows slowed sharply from the 2016 levels.

“During the Q1 to Q3 period, inflows of 179.7 tonnes were just one-quarter of the record inflows seen in the first nine months of 2016. ETF investors lacked a clear catalyst in Q3 as the gold market was pulled in different directions, culminating in modest global inflows for the quarter," WGC said. It added that Investors continued to favour gold’s risk-hedging properties, but the greater focus was on buoyant stock markets.

Demand for gold from other sectors consolidated as central bank demand was healthy in Q3, up 25% year-on-year to 111 tonnes, while bar and coin investment strengthened by 17% to 222 tonnes, albeit from a low base.