At a time of an emerging worry that a Donald Trump presidency will spell trouble for trade ties, trade flow in the form of both exports and imports has remained strong for emerging market economies. The Institute of International Finance finds that in terms of hard data, economic strength came entirely from the trade component, while industrial production slipped for emerging market economies. There was relatively little change in the pace of exports, with the most notable shift coming from Indonesian export growth turning positive. Instead, further growth in imports underpinned the strength of the trade component. With that backdrop, six of the 10 countries whose merchandise exports factor into the model and six of the eight countries whose imports factor into the model saw positive trade growth over the past three months. Fourteen Indian firms have been permitted to export basmati rice to China—a welcome move after the ban in 2012 as companies could not conform to Chinese quality standards, especially on grounds of pest control. So far, West Asia is the largest importer of Indian basmati rice, with India being the largest exporter too. But then, a report from Icra Ltd has figures that suggest a decline in export growth since 2014. Exports in 2017 may remain at the year-ago level of Rs22,718 crore. Against this backdrop, the move by China to allow imports is a big positive. In fact, the volume of basmati crop is estimated to be lower this year compared to the last. Hence, higher demand could mean better realizations on exports for firms. Further, if local demand is high, it will give an additional fillip to profitability of these firms. 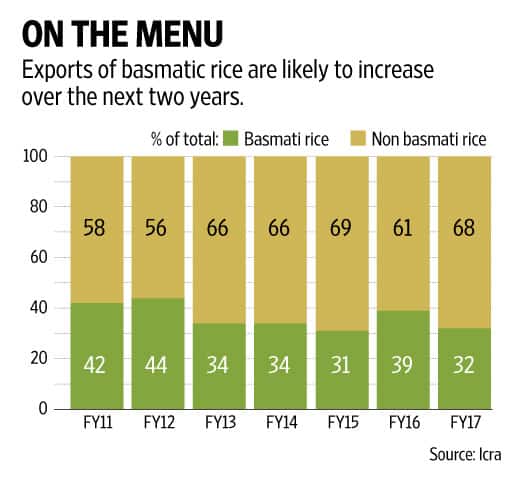 Electricity generation rises on favourable base

Electricity grew by an impressive 8.5% in November, shows provisional data from the Central Electricity Authority. In the previous four months of July-October generation grew in the range of 0.1-2%. November generation is aided by a favourable base. In the year-ago month, generation is flat or grew just 0.7%. The growth is led by nuclear and thermal power sectors. Surprisingly, hydropower generation, which usually sees a seasonal spurt due to monsoon rains, dropped 2.8%. While it has to be seen if the growth sustains, the thermal power sector continues to operate at suboptimal levels. Plant utilization or the plant load factor of the sector stood at 60.7% last month. 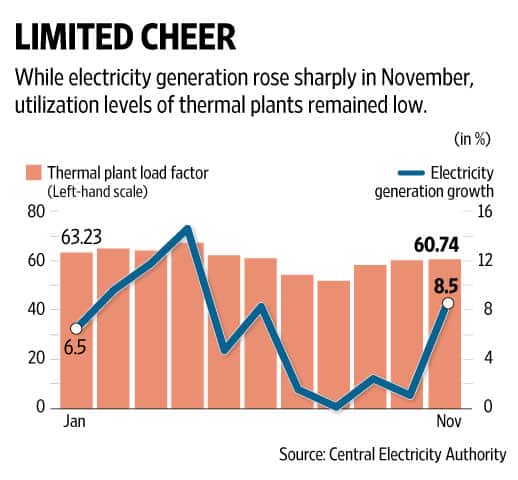