Consumer loans specialist Bajaj Finance Ltd seems to have held on to its growth trajectory for the second straight quarter as assets under management grew 38% to Rs72,139 crore, similar to the average of 35% over the last several quarters. 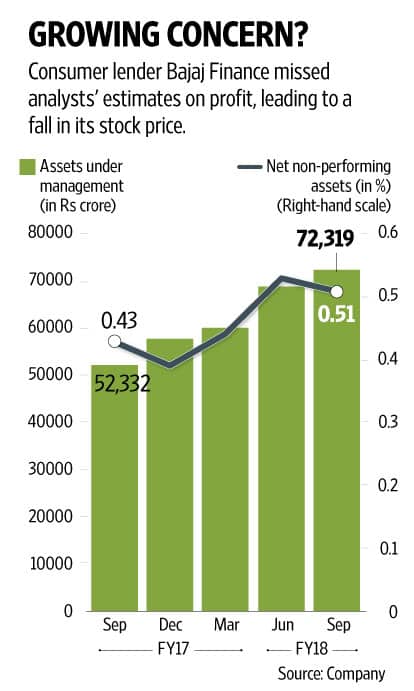 New loans booked rose 38%, a clear indication that the consumption engine on which the Indian economy is running has immensely benefited the non-banking financial company (NBFC). Net profit increased 37% for the three months ended September to Rs557 crore on the back of this growth.

Notwithstanding the strong growth, the consumer lender managed to keep its asset quality intact with gross and net bad loan ratios remaining at the same levels as the previous quarter. Part of this is due to the fact that the NBFC is not just pushing more loans to its existing customers but also increasing its customer base at a fast clip. This tends to keep the indebtedness of its borrowers in check, thus contributing to future asset quality strength.

While Bajaj Finance did push personal loans to its existing customers, more than 40% of loan disbursals in consumer durables, rural customers and loans to small businesses were from new borrowers.

So why did the company’s shares fall 3.38% to close at Rs1,888.85 apiece? To start with, the net profit missed the median estimate of Rs582 crore by analysts surveyed by Bloomberg. There is also a sequential fall in core income and even the growth in disbursements is lower than the previous quarter. Considering that the second quarter is like a prequel to the onsetting festival season, the slower growth in lending comes as an uncomfortable fact.

Further, at the current level, the stock trades at a rich multiple of 7.4 times its estimated book value for fiscal year 2018 while its parent Bajaj Finserve Ltd, which houses general and life insurance businesses, too trades at 4.3 times estimated book value. While it is fair to argue that the consumption story warrants the valuation, investors would want to wait for the second half to judge how strong a growth the company will show.