A rocky road to redemption for Dilip Shanghvi’s Sun Pharma

Sun Pharma's management appears keen to resolve investor concerns and unwind transactions or structures they disapprove of, but there remain unanswered questions

Sun Pharmaceutical Industries Ltd tried its hand at limiting the damage from a scathing note by a brokerage firm and a whistleblower complaint to the Securities and Exchange of India (Sebi). The company issued a written statement clarifying its position, followed by a conference call with analysts and investors. But none of these seem to have helped. Leave alone a recovery, Sun Pharma shares fell another 2.7% on Tuesday, taking the drop in the past seven trading sessions to more than 15%.

Investors are worried about the possibility of a regulatory probe. Besides, the company’s valuations don’t offer much comfort either—they are near the industry average after the correction, and provide no compelling reasons for investors to jump in. Are the worries around corporate governance reasonable?

Sun Pharma managing director Dilip Shanghvi’s response to a question on the use of little-known merchant banker Jermyn Capital illustrates the difficulty it is facing in explaining its past decisions. Earlier, the company clarified that Jermyn Capital had only co-managed its 2004 FCCB (foreign currency convertible bond) issue and JPMorgan & Chase Co. was the lead manager. 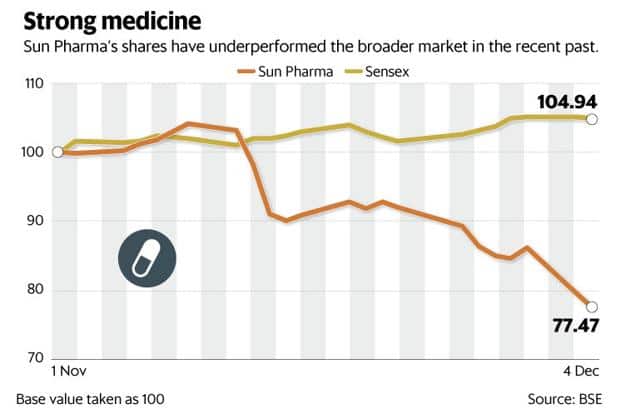 When an analyst queried why they needed Jermyn Capital even as a co-manager and whether it was true that the merchant banker had links to Ketan Parekh and Dharmesh Doshi, Shanghvi replied he was unable to respond as the information was old and they did not have it with them.

He also made a point that in 2004, Sun Pharma was a ₹ 1,100 crore company, which is barely 3% of its current revenue. In the past 14 years, the regulatory framework, expectations of transparency and corporate governance have changed significantly. Applying today’s standards and revisiting old management decisions puts an unreasonable burden, goes the reasoning. Evidently, investors don’t agree.

But questions have also been raised on current developments. In FY18, loans given by Sun Pharma rose to ₹ 2,242 crore, compared to ₹ 69.8 crore a year ago. This sharp increase has been questioned. The company said this was a structured transaction, related to the pharmaceutical business. But it did not share more details, citing business sensitivity. Sun Pharma has said it can unwind this transaction earlier than planned, if required.

Then, there’s the matter of Aditya Medisales, through which the domestic business sales are routed. This firm became a related party in FY18 due to consolidation among its promoter entities. Even earlier, it was linked to Sun Pharma’s promoters. Shanghvi explained that this was a structure created from a tax efficiency viewpoint but the company is open to changing it. When asked if this will affect the tax outgo, he clarified that with changes to laws, such as the goods and services tax (GST), there would be no impact.

Although Shanghvi did not comment on the tax efficiency part, the structure may have been useful when state taxes were levied in every state. Some companies devised a distribution structure to lower the cascading effect of state taxes. If Sun Pharma taking over distribution will have no impact on the tax efficiency, maybe the change could have been effected earlier itself.

On the positive side, Sun Pharma’s management appears keen to resolve investor concerns and unwind transactions or structures they disapprove of. But there remain unanswered questions or partially unanswered questions, and whether regulatory agencies investigate these allegations. The outcome of any investigation can be an uncertainty that could hang heavy over the stock. It also comes at a time when growth concerns in the US generics business are already affecting investor sentiment.

The management may have to do more, on sharing information and taking adequate steps to satisfy investors.

The episode acknowledges that investor concerns on corporate governance, whether big or small and whether new or dated, will have to be taken seriously. It also puts other companies on watch, even the big names, who may have skeletons in their closets.