The silver lining in this story is that while pricing pressures have persisted, robust load factors have compensated to some extent

The first, for the December 2015 quarter, came as a rude awakening, with shares correcting 25% in two trading sessions after the results announcement.

After the June quarter results were announced, its shares fell 11% in two trading sessions.

Thankfully for investors, the September quarter results weren’t way off the mark vis-a-vis the Street’s expectations.

IndiGo reported an operating profit of Rs195.6 crore, 2% lower than what analysts at Kotak Institutional Equities had estimated.

But there isn’t much to get excited about in the results either.

For one, pricing pressures have continued. Although this was expected, given the increased competitive pressure, the 11% year-on-year decline in yield is more than what some analysts estimated. 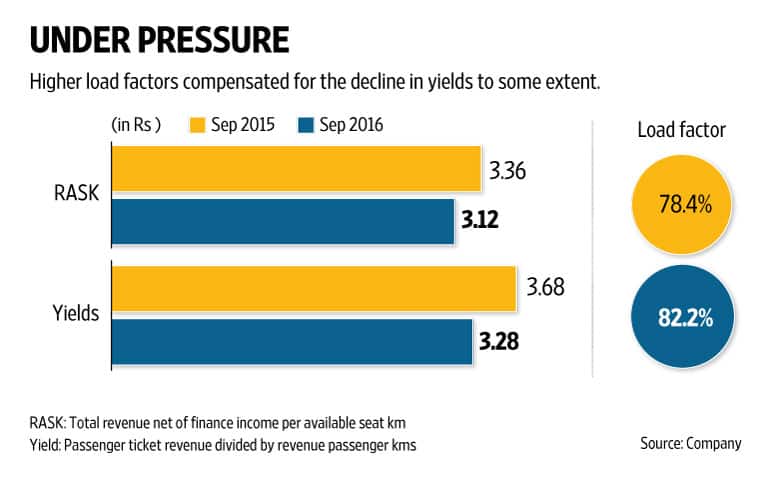 At the time of announcing the June quarter results, IndiGo had said it will re-think matching fares more aggressively with competitors.

The silver lining in this story is that while pricing pressures have persisted, robust load factors have compensated to some extent. IndiGo’s load factor during the past quarter was 82.2%, compared with 78.4% for the same period last year.

A slower rate of increase in other expenses and employee costs facilitated 11% Ebitdar growth to Rs967.7 crore. That’s despite the fact that fuel costs as a percentage of revenues increased 217 basis points to 37% last quarter. One basis point is one-hundredth of a percentage point. Ebitdar is earnings before finance income and cost, taxes, depreciation, amortization and aircraft and engine rentals. Ebitdar margin declined to 23.2%, compared with 24.6% in the same period last year.

After the seasonally lean September quarter, it will be interesting to watch how the stronger December quarter shapes up. Load factors may continue to remain healthy but analysts don’t foresee much respite on pricing pressure. The company said in a post earnings conference call that the competition levels remain high.

Industry passenger growth is encouraging, with passengers carried by domestic airlines in January-September 2016 increasing 23%. But that itself may not be enough to expand valuations further. The IndiGo stock currently trades at 16 times estimated earnings for this fiscal year.