But Tata Motors Ltd has left them far behind in the degree by which it has exceeded street estimates. Nine analysts polled by Bloomberg news agency had estimated a net profit of Rs99.4 crore. The company reported a net profit of Rs514 crore, and almost the entire outperformance is in operating profit.

In other words, none of the higher-than-expected profit is owing to one-off factors which the street hadn’t anticipated in its estimates. True, here was a one-time income from the sale of shares of Tata Steel Ltd last quarter, but the company had already disclosed this at the time of sale and so this would have been part of the estimates. 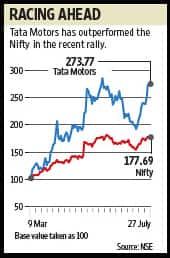 The company’s shares have now risen by around 175% from its lows in early March, outperforming the market—up 78%—by a wide margin. Ahmed Raza Khan / Mint

Analysts have been mainly surprised at the margin improvement of at least 5 percentage points on a quarter-on-quarter basis to 11.4%. To start with, average realizations were much higher than expected.

One analyst with a foreign broker says that he is baffled at the quarter-on-quarter increase in realizations of around 5%, even though there were no price increases during the period. The company says this is the result of a change in the product mix, but that explanation isn’t entirely convincing, says the analyst. Besides, raw material costs were much lower than anticipated.

According to the company, the savings it has extracted are sustainable. Besides, it says that there has been improvement in demand for its products and the availability of financing for its customers.

Tata Motors’ shares rose by around 5% soon after the results were announced and the rally should continue on Tuesday. The company’s shares have now risen by around 175% from its lows in early March, outperforming the market—up 78%—by a wide margin, just as most highly leveraged firms whose valuations had been beaten down mercilessly prior to the recovery in the markets.

The rise in the stock has been aided by the signs of improvement in the domestic business as well as a belief that financing the company’s huge debt would now be a relatively easier affair.

In all this, the huge liability of Jaguar-Land Rover (JLR) has been conveniently forgotten. The company’s shares had fallen to the Rs290 levels after the company announced consolidated results for the March quarter, which disclosed JLR’s huge losses and the cash burn, but they have now risen way beyond even the pre-results level to Rs374.

Perhaps when the consolidated results for the June quarter are disclosed, there will be a reality check.