According to Daniel Colover, associate editorial director, Platts, lower crude prices and better product spreads are responsible for stronger refining margins sequentially. “In the December quarter, the average price of Dubai crude was $40.68 per barrel, compared with $49.99 per barrel in the September quarter," said Colover, adding that there has been a significant rise in light distillates spreads such as naphtha and gasoline.

GRM is the difference between the total value of petroleum products coming out of an oil refinery and the cost of crude. 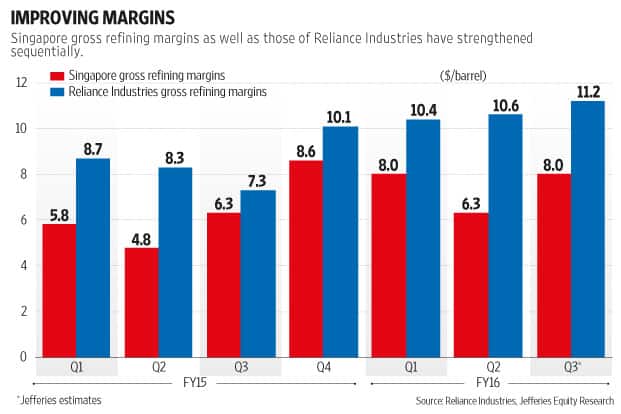 Higher benchmark margins are expected to reflect positively in the December quarter financial performance of Reliance Industries Ltd (RIL) and state-owned refining and marketing companies such as Bharat Petroleum Corp. Ltd, Hindustan Petroleum Corp. Ltd and Indian Oil Corp. Ltd. “We expect RIL’s GRM, which has been above $10 a barrel for the last three quarters, to move up further to over $11 per barrel, a seven-year high; the utilization rate is also expected to be high at 115%," pointed out analysts from Jefferies Equity Research in a note to clients. RIL had said its September quarter GRM was the highest in seven years. Nonetheless, “commentary on Reliance Jio and downstream projects will be key", Jefferies added.

The question is: will stronger refining margins be sustained? Increasing global refining capacity could weigh on margins. However, as Colover says, while oil prices will play an important role in determining margins, if product demand continues to remain strong, then margins will get some support.

No doubt, product demand in India has been strong. However, product demand in China will be an important factor to watch out for, given the worries of a looming economic slowdown and the sheer size of the Chinese market. As K. Ravichandran, senior vice-president at ICRA Ltd, said, China accounts for about 40% of the Asian refined petroleum products demand against 10% for India. Accordingly, while many analysts expect India’s refined products demand growth to be relatively faster than China’s in 2016, that may not totally compensate for slowing growth in China. That’s a risk to refining margins.