US crude prices finished the week up 7.6 %, their best showing in six months

Crude oil’s rally is starting to sweep away the pessimists.

After starting 2019 on a cautious tone, hedge funds last week slashed bets on falling Brent crude prices to the lowest level since mid-November, as they looked to get out the way of a recovery that pushed oil back into a bull market. Wagers on increasing prices climbed the most in a month.

The global benchmark surged last week, as the U.S. and China made progress in trade talks and Saudi Arabia reaffirmed its commitment to head off a supply glut. Money managers have turned alternately bullish and bearish on the rally in recent weeks, but the evidence for a sustained move higher is getting harder to ignore, said Mark Waggoner, president of Oregon brokerage Excel Futures Inc.

“Just having another positive week is going to be huge for a lot of people’s psyches, after we got so beat up last year," Waggoner said by telephone. “I think you’re going to see more of them coming on board."

Brent has gained more than 20 percent since hitting an 18-month low in late December. Nonetheless, it’s still down by almost a third since October and faces continuing pressure from the boom in U.S. shale drilling and an uncertain economy. Prices fell for the first time in two weeks on Friday, retreating 2 percent to $60.48 a barrel.

Brent net-long positions -- the difference between bullish and bearish wagers -- climbed 3.8 percent to 158,146 options and futures contracts in the week ending Jan. 8, the ICE Futures Europe exchange said on Friday. 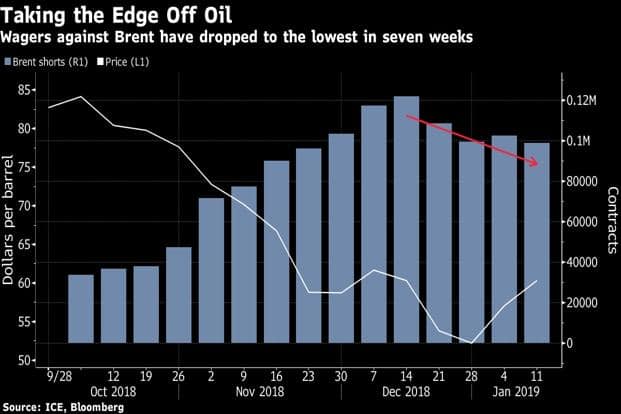 Most of the shift came from a 3.6 percent decline on contracts predicting a Brent drop. Bets on rising prices edged up 0.8 percent. They’ve traded gains and losses for the past six weeks.

Late December’s more bearish stance “was more about hedge funds squaring their books after they’d had a very bad year," said Frances Hudson, a global thematic strategist at Aberdeen Standard Investments in Edinburgh. Sentiment has improved markedly, she said in a telephone interview.

“Things seemed to have settled down a little bit in terms of production," Hudson said. “Saudi Arabia is being very disciplined and is following cuts in December with more cuts in January."