While the floor on oil prices has moved up, US production will ensure that the cap remains

On 30 November, the Organization of Petroleum Exporting Countries (Opec) and its non-Opec friends decided to extend the output cuts till the end of 2018.

That this is a positive development for crude oil prices is obvious. Brent prices, though, increased just marginally on 1 December, but the sharp increase in prices (see chart alongside) in the run-up to the Opec meeting suggests that the market was already factoring in a favourable outcome.

Ritesh Jain, chief investment officer at BNP Paribas Asset Management India Pvt. Ltd, says the deal sends a strong signal to the oil markets that the cooperation on supply cut is here to stay and, more importantly, gives the next leg to the increase in oil prices.

“Unless there is a significant increase in shale oil supply, oil prices seem to be on strong footing, for the moment," added Jain. 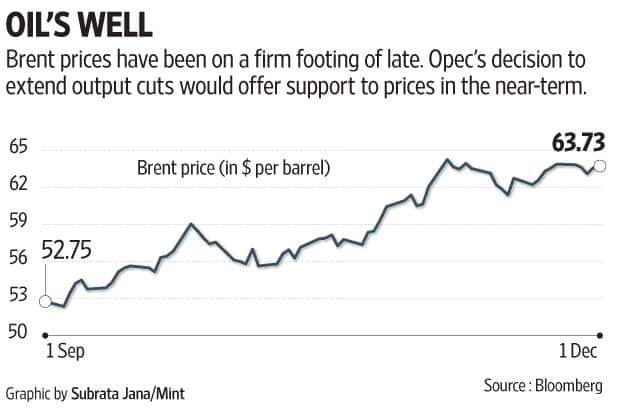 Having said that, investors would watch US crude production and shale rig counts numbers closely here on.

That doesn’t mean long-term dampeners to crude oil prices, especially the threat of higher production from shale oil prices, have ceased to matter.

What has happened is that in the short run there are limitations to shale oil producers ramping up output quickly.

As an article by George Friedman and Xander Snyder of Geopolitical Futures said, “Rising oil prices cannot be explained solely by events in the Middle East or by Opec’s cuts. Rather, it’s a combination of Opec’s cuts and the inability in the near term of shale drillers to significantly expand capacity. These limitations, however, don’t change the fundamental interplay of shale oil drillers and the global oil market. New drilling technology is continuing to lower per-barrel break-even prices, and more shale companies will find their operations profitable when oil prices increase, thereby increasing the amount of oil they supply to the market and driving prices back down."

That said, a factor that will continue to support oil prices is the continuing global economic recovery.

Oil bulls will, however, keep a wary eye on the US oil rig count. According to oilprice.com, a day after Opec extended the production cut deal to end-2018, oil and gas rigs in the US climbed by six, while US crude oil production for the week ended 24 November was at an all-time high.

In short, while the floor on oil prices has moved up, US production will ensure that the cap remains.