Mumbai: Despite uncertainty through the year related to a host of factors, including valuations, earnings, interest rates and elections, Indian markets have outperformed their global peers in 2018. A synchronized global economic slowdown, China’s structural deceleration and potential escalation in the US-China trade conflict threatened Asian equities in the year gone by.

Analysts expect political uncertainty to be a negative overhang in the first half of 2019 but said lower oil prices have created a positive environment that could help to correct macro imbalances (twin deficits), ease underlying inflationary pressures and open up some space for policy easing.

Volatility is expected to rise in equity markets in 2019 with potential risks seen from a global slowdown and China-US trade issues, oil prices and general elections in India.

There could be volatility in the equity markets until the outcome of the elections becomes clear, while near-term legislative and policy actions may be influenced by election populism, according to Neelotpal Sahai, head, equities, HSBC Global Asset Management India. "The year 2019 could be a year of two halves, with the first half characterized by volatility on the back of the general election cycle and in the second half we should see fundamental factors taking over and influencing the equity market performance," he said.

Sensex and Nifty gained 5.91% and 3.15% respectively in 2018 after a blockbuster year for equities last year. However, both BSE (Bombay Stock Exchange) mid-cap and BSE small-cap indices slipped to seven-year lows on concerns of steep valuations and regulatory measures. Among major markets, the Shanghai Stock Exchange Composite Index (down 24.59%) saw the steepest decline in 2018. The MSCI Emerging Markets and MSCI World indices slipped 16.90% and 11.06% in the year gone by.

Amid stock market volatility, foreign institutional investors (FIIs) fled India and equity markets saw a net outflow of $4.38 billion, the steepest sell-off in a decade. However, domestic institutional investors (DIIs) invested a record ₹ 1.09 trillion in Indian equities in 2018. Crude prices rose 12.86% from January till October but fell 18.47% in the year.

According to Nomura, a sharp correction in oil prices is a positive terms-of-trade shock that is likely to correct macro imbalances, boost real disposable incomes, and improve profit margins, albeit with a lag. Nomura said the 2019 elections should mark a turning point as political stability and the lagged effects of lower commodity prices should enable a recovery in the second half, pushing gross domestic product (GDP) growth back towards 7% by the end of 2019 from 6.2% in the first half of 2019. “We expect funding to remain a challenge until the elections because of both the adverse domestic environment (weak growth and political uncertainty) and global factors. However, we expect net capital inflows to accelerate in the second half of 2019 and amply fund the current account deficit, as both domestic and the global risk environment turn more favourable," Nomura said in a note on 10 December.

S. Naren, executive director and chief investment officer, ICICI Prudential AMC, believes 2019 is likely to provide a better investment opportunity in equities as compared to 2018 because the market is fairly valued now.

“Uncertainty regarding general election and global developments such as the pace of US Fed quantitative tightening are some of the challenges the Indian equity markets could likely face," Naren said. On the global front, emerging markets could come to the spotlight this year with expectations of a slowdown in developed economies, while India is like to move into a sweet spot toward the latter half of the year. 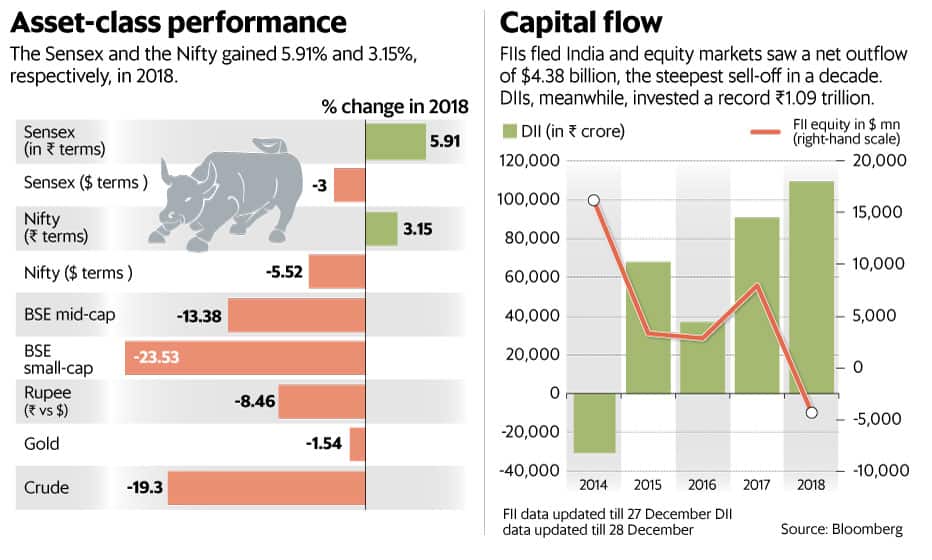 Kotak Institutional Equities sees around 10-15% returns from the Indian market in the year ahead driven by earnings growth, possible modest de-rating of overall market multiples on global slowdown concerns and a potential de-rating of ‘quality’ stocks and a broadly stable macro.

Manishi Raychaudhuri, Asia-Pacific head of equity research and Asian equity strategist - BNP Paribas Securities, said India presents a somewhat surprising combination of improving macro-economy but a pedestrian corporate earnings environment. “What further complicates India’s earnings picture, in our opinion, is a significant overestimate of the market’s earnings growth in 2019 and 2020. We believe India’s earnings growth potential is around 14-15%, slightly higher than nominal GDP growth, not 18-21% as current consensus seems to suggest. We are sceptical about the growth estimates in financials, healthcare and consumer discretionaries," he said in a note on 10 December.

Key themes that the markets are likely to be focused on are earnings, pre-poll alliances, rate decisions, Union budget (government spending) and global cues to make its moves in the first quarter of 2019, said Morgan Stanley.

Among other asset classes, rupee weakened 8.46% while gold was also down 1.65% in 2018. According to Standard Chartered Bank fundamentals are supportive for rupee over the next 6-12 months. “Attractive real yields (net of inflation), growth momentum and robust FX reserves of $394 billion and dollar stabilisation is likely to be positive for the rupee. In the near-term, dollar strength, oil price and India’s general elections will determine rupee direction," it said. Standard Chartered Bank expects gold prices to remain range-bound $1,200-1,300 per ounce in 2019.