Investors to RCom: get real

Reliance Communications Ltd (RCom) has said it has signed a non-binding term sheet with Brookfield Infrastructure Group to sell its tower assets and related infrastructure. Brookfield, on its part, hasn’t issued a statement or even commented about the transaction, which implies the deal is still at a preliminary stage.

It’s hardly surprising that investors aren’t cheering RCom’s debt reduction endeavours yet. In the past month, the company has announced the merger of its wireless business with Aircel Ltd, and now the tower deal. Both put together will reduce debt by around 60% at RCom, according to company executives. But RCom shares have fallen by around 6% in the past month.

Last December, the company had signed a similar non-binding term sheet with Tillman Global Holdings Llc and TPG Asia Inc., without disclosing any financial details of the proposed transaction, but the deal didn’t materialize.

This time around, the company has said it will receive an upfront cash payment of Rs11,000 crore from Brookfield, besides which it “will also enjoy 49% future economic upside from the towers business, based on certain conditions". 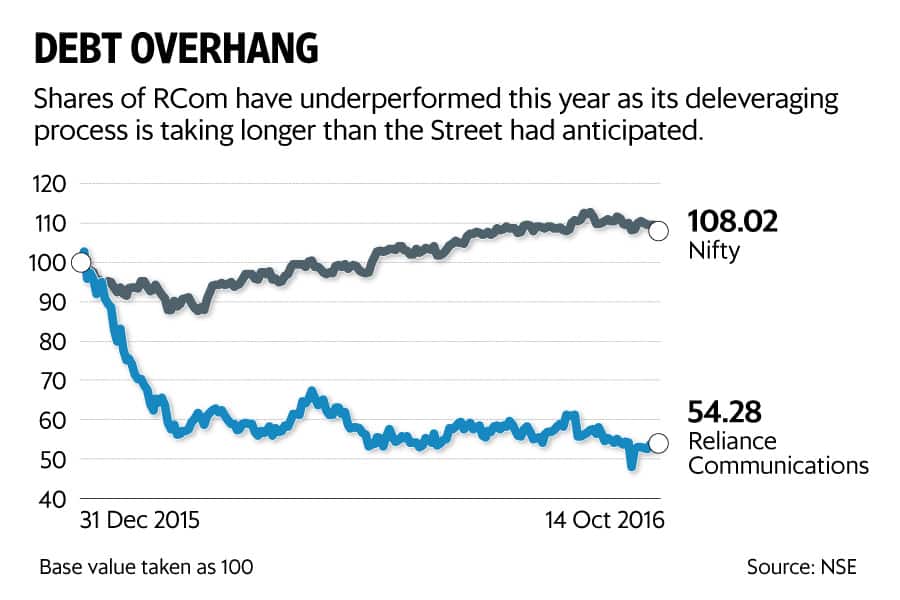 According to a company executive, RCom will retain a 49% stake in the towers business, provided it meets certain conditions. It’s anybody’s guess what these conditions might be—they may be related to tenancy rates on the towers, and the profitability and growth of the business. But the sum and substance of this is that Brookfield’s stake can be expected to increase and RCom’s stake to decrease if these said conditions are not met. If the tower business does exceptionally well under Brookfield, perhaps RCom may get a better valuation for its remaining 49% stake.

But all of this is conjecture. Unless details of the conditions are disclosed, it’s difficult to say whether RCom has got a good deal for its towers.

According to the executive cited above, apart from the Aircel and Brookfield deals, the company has also initiated monetization of its real estate assets. All of these initiatives are expected to reduce debt by around 70% at RCom. Of course, as pointed out in this column earlier (bit.ly/2dVhJcY), the wireless entity that will emerge after the merger with Aircel is expected to be heavily indebted.

In any case, all of the debt reduction plans the company is talking about have to still fall in place. Each of these deals is still a work-in-progress and some of them are at fairly preliminary stages. It’s much like the virtual merger with Reliance Jio Infocomm Ltd that RCom chairman Anil Ambani spoke of at the company’s annual general meeting. Investors would rather see a real reduction in debt, just as they would rather see a real merger with Reliance Jio.