FIIs abandon India for US assets amid market volatility

In Asia, FIIs sold the most in Japan, withdrawing $45.82 billion from equities in 2018 as US assets became more attractive

Mumbai: This year has been a brutal one for emerging markets (EMs), including India, with investor portfolios sinking deeper into the red. Amid stock market volatility, foreign institutional investors (FIIs) fled India and equity markets saw a net outflow of $4.58 billion, the steepest sell-off in a decade.

FIIs dumped domestic stocks in the midst of the rupee weakening against the dollar, high crude oil prices, increase in US treasury yields and stronger economic growth in the US, according to analysts.

Year to date, the local currency is down 9.21%. Crude prices rose 12.86% from January till October. They have, however, plunged nearly 37% since, offering some respite to the government and companies in India. 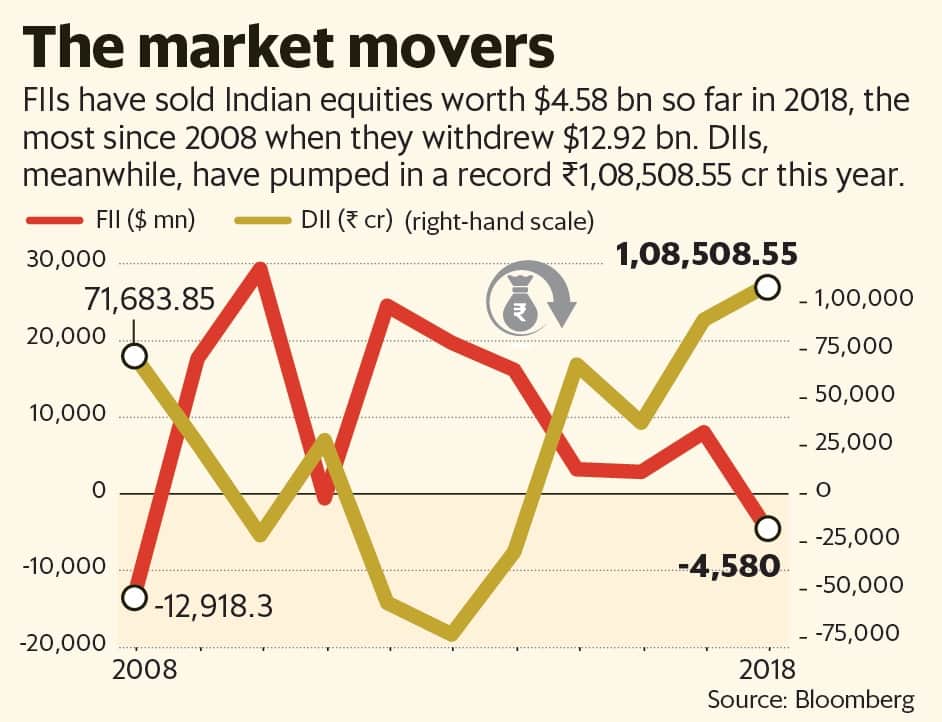 FIIs were net sellers in all major Asian markets, except China. In Asia, they sold the most in Japan, withdrawing $45.82 billion from equities in 2018 so far, as US assets became more attractive.

The US Federal Reserve raised interest rates four times in 2018—the last one was announced in December. The US central bank, however, has forecast fewer rate hikes next year and signalled that its tightening cycle is nearing an end in the face of financial market volatility and slowing global growth.

Higher interest rates tempt large foreign funds to move their money to the US, hurting emerging markets that faced the double whammy of a stronger dollar and high crude prices.

“The Fed has indicated two more rate hikes in 2019, as against an expectation of three earlier. As a result, we believe FIIs may look at emerging markets more seriously in 2019," said Anand Shah, deputy CEO and head of investments, BNP Paribas Asset Management India Pvt. Ltd.

Year to date, the benchmark Sensex has gained 5.14%, while the MSCI World and MSCI Emerging Market indices have slipped 12% and 18%, respectively.

In addition to external factors, domestic issues such as change of rules regarding beneficiary ownership, widening current account deficit, a liquidity crisis affecting non-banks, the resignation of Reserve Bank of India governor Urjit Patel and uncertainty surrounding the outcome of the 2019 elections added to the general negative sentiments, said Menon.

Menon said he was optimistic that India would be able to attract more FII investments compared with other emerging markets in 2019.

He said there was overall consensus that the economic condition in India is improving.

“Global asset classes are trying to adjust to the new regime of not-so-easy money. And this change is likely to have an impact on allocation of funds globally. Within emerging markets, India is favourably positioned with its rich demographics, higher sustainable growth rates and stronger balance sheet," Menon said.

India is likely to rank among the fastest growing EMs, while a stable government formation in 2019, coupled with earnings recovery, is expected to lead to an increase in FII flows into the country next year, said Shah of BNP Paribas.

Credit Suisse is less optimistic. “Global price to earnings multiples are now correcting from elevated levels, and with India’s premium to the world still near its seven-year highs, it could show up in lower multiples for India too. As rising uncertainty impacts multiples of global cyclicals, names listed in India could also de-rate," it said in a note on 17 December.

Meanwhile, domestic institutional investors (DIIs) invested a record ₹ 1.09 trillion in Indian equities in 2018. “This has been led by domestic mutual funds, largely due to stable SIP flows. We believe, given low penetration of equities amongst Indian households, increase in financialization of savings and improved earnings outlook will be drivers for stable flows from domestic investors into equities," Shah said.

Ashwin Ramarathinam from Mumbai contributed to this story.