Home / Money / Calculators /  Will bank bad assets affect your deposits?
Back
Share Via

Non-performing assets (NPAs) have become the new scare term for the Indian capital markets and for the economy. A global and domestic slowdown has meant declining demand across many industries like steel, power, infrastructure and construction . As a result, cash flows have slowed down too. Banks are lenders to most of these businesses and when cash flows slow down, the interest payments to banks can suffer. As a result, bank profitability suffers.

These are the same banks in which you hold your savings accounts or a fixed deposits. So what happens when a bank doesn’t receive money from its assets? Will it be able to pay for its liabilities (money from depositors)? This might be the question that some of you are thinking about.

But the equation isn’t that linear. Mint Money looks at the problem and ascertains to what extent you should be worried.

What is the problem?

The rise in NPA levels is a cause for worry because unless a bank has good assets (loans and advances), which pay up on time, it might face trouble in paying its lenders or deposit holders. The focus is largely on public sector banks because traditionally they have had heavy corporate loan books. However, large private sector banks with exposure to corporate loans are also affected. Stock prices of private and PSU banks in this category have corrected 30-60% in the last one year. Hence, it’s not ownership that matters, rather it is asset quality. 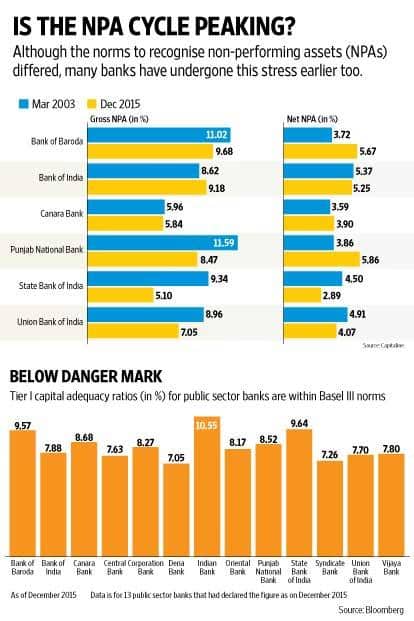 Let’s try to qualify the problem slightly more by looking at the details. What is an NPA? An NPA is an asset that stops generating income for a bank. According to a master circular issued by the Reserve bank of India (RBI) in July 2015, banks should classify an account as NPA only if the interest due and charged during any quarter is not serviced fully within 90 days from the end of the quarter. NPAs can be recovered and don’t always amount to a loss.

In a recent interview to Mint, chairman of Bank of Baroda (BoB), P.S. Jayakumar, had said of the total fresh slippages (NPA assets) in the third quarter of financial year (FY) 2015-16, around 48% came from clients that are still paying the Bank of Baroda but may not be paying some other banks (http://bit.ly/1OcnxmE ). This classification was a result of RBI’s asset quality review. According to its third quarter result presentation, for the nine months ended December 2015, the total write-offs amounted to 413 crore, whereas recovery and upgrade of assets earlier classified as NPAs amounted to 1,493 crore for the same period. Hence, an NPA isn’t always a loss.

In a note this month, rating agency Crisil issued a credit alert as it saw heightened asset quality stress. The note went on to say that the pace of deterioration had increased. According to a CARE Ratings report on NPAs, the gross NPAs across all banks has increased to 8.1% in third quarter FY16 from 4.4% in fourth quarter FY15.

The RBI has been conducting asset quality reviews across banks and governor Raghuram Rajan has stressed on better NPA recognition to ensure that the problem is addressed well in time rather than stretched or swept under the carpet. As a result of this review and the worsening global demand situation, the net NPAs in the banking system in third quarter FY16 shot up by 30%, compared with second quarter FY16 (according to data from Capitaline).

This isn’t the worst that the Indian banking sector has seen in this century. In 2001, the average net NPAs for public sector banks were 7-8% of total advances in the system. It took 6-8 quarters then for the cycle to unravel and net NPAs to move lower. Lastly, are the banks adequately capitalised? After BoB’s results were announced, in an interview with Mint, Jayakumar said the bank wasn’t in need of more capital at the moment. This, despite having recognised a large chunk of their assets as NPAs in the third quarter. He alluded to alternate methods of shoring up capital and was confident growth would not suffer.

The Tier I capital adequacy ratio (as per Basel III norms) of some of the larger public sector banks is between 7.7% and 9.6% for the third quarter of FY16, which is higher than the prescribed RBI (Basel III) lower limit of 7%. A senior executive of a private sector bank, who preferred not to be named, said, “While banks are identifying NPAs as per RBI’s requirements, there is no systemic risk."

For smaller public sector banks, the problem is greater.

From the available data it appears that large public sector banks, despite their high level of NPAs, are adequately capitalised. Moreover, the issue of NPAs is cyclical—sectors most affected are the ones suffering from a demand slowdown—rather than a structural problem. The chief investment officer of a private asset management company said, “The government has recently announced the minimum import price for steel, which should enable domestic steel manufacturers to improve their sales and, hence, cash flows. The steel cycle was also depressed in 2001 but it recovered. Similarly, power and infrastructure companies, too, are likely to see better times in a year or so."

While there is little room to hide in case of fraud, for regular lending there is an asset backing or collateral. Secured loans that are defaulted can be made good to an extent by selling the collateral and don’t amount to a loss for the banks.

For public sector banks, the government can provide additional capital. Ashvin Parekh, managing partner, Ashvin Parekh Advisory Services LLP, said, “For bank lending, the first line of defence is the asset backing a loan and then for public sector banks the capital is important. Given that the government is in a position to capitalise banks if needed, depositors shouldn’t be concerned."

The bigger concern is around smaller banks—capital adequacy isn’t as healthy and recapitalisation is required. A chief investment officer at a private, mid-sized asset management company, said, “There is an issue with smaller sized banks and the solution is to merge them with their larger peers. In two or three years, it’s likely that some small public sector banks may not exist."

So far, there hasn’t been a case where depositors needed to worry. In the case of Global Trust Bank, for example, the net worth was negative and eventually it got merged with oriental bank of commerce in 2004. While Global Trust Bank’s shareholders suffered huge losses, depositors didn’t lose anything.

For large institutional investors like mutual funds, there is concern on quality, especially around certificates of deposit (CDs) issued by public sector banks. Sujoy Das, head-fixed income, Religare Asset Management Co. Ltd, said, “The NPA situation is worsening and we are keeping an eye on which CDs we want to include and which to avoid." This discerning view helps maximise yields for investors while keeping risk in check.

However, here as well, sovereign support helps. R. Sivakumar, head-fixed income, Axis Asset Management Co. Ltd, said, “In case of certain public sector bank balance sheets, the stress is evident. While the government is not a guarantor on the deposits, its ability to provide capital is seen as a great comfort. Default risk isn’t seen as yet."

There is pressure on banks’ balance sheets, but even in the worst case, as the chief investment officer of an asset management company pointed out, when an economy handles its own monetary and fiscal policy, it’s easier to manage such issues. Printing money is always an option. While this may not to be the best solution, the point is that there is a cushion for deposit holders.

The issue of cyclical bad loans can be addressed by incremental investments in key economic sectors. Measures such as minimum import price for the steel sector, lower coal prices and garnering foreign investment into roads and some infrastructure projects, could be useful. In turn, the banking system may be able to recover NPAs. Experts, however, suggest this may still be another 3-4 quarters away. For savers its still too early to worry about safety of their deposits.