Home / Market / Mark-to-market /  RBI rate cut: a timely signal but miles to go
Back
Share Via

RBI rate cut: a timely signal but miles to go

Will the 50bps rate cut boost domestic consumption and improve demand besides kick-starting the investment capex cycle that is in a state of inertia?

Will the 50 basis point (bps) cut in repo rate do what the earlier 75 bps cut couldn’t? Will it boost domestic consumption and improve demand besides kick-starting the investment capex cycle that is in a state of inertia? One basis point is 0.01%.

Surely, the cumulative 125bps cut since January clearly signals that the central bank’s focus has shifted from containing inflation to fuelling consumption. Also, it is timely and could spur banks ahead of the festive season to lower interest rates on consumer loans. Hopefully, this will spur demand for cars, houses and white goods, which are all discretionary spending items.

Here’s a look at the impact on some key sectors.

In auto, the assumption is that lower interest rates, if passed on to the user, will boost sales, mainly two- and four-wheelers. Shares of passenger car market leader Maruti Suzuki India Ltd surged after the rate cut was announced on Tuesday, closing 3.12% higher on positive sentiment.

However, more than the rate cut, it’s the timing that’s meaningful from the auto sector’s perspective. The bold 50bps rate cut comes when fuel prices are down. Together, they will lower the cost of owning a vehicle, which is an important factor in the purchasing pattern of discretionary items. Besides, customers are being lured with new product launches and offers for the festive season. Analysts also reckon that 2015-16 could be a year of increase in real income; salary increases are ahead of the inflation rate.

However, motorcycles may not get the desired push through rate cuts, given that a significant part of sales comes from rural areas, which have been hit by two successive years of deficit rainfall.

In real estate, if one were to judge investor sentiment by the stock performance, then the BSE realty index has been among the worst sector performers. Given the high prices of residential property, “people will not buy homes simply because interest rates have softened slightly," says Arun Aggarwal, vice-president, Religare Capital Markets Ltd. Buyers are more sensitive to drops in asset prices that will lower the loan value, rather than a small relief in the monthly interest outflow. 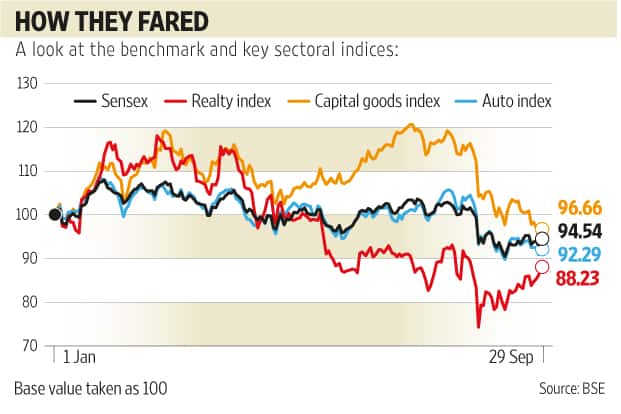 That said, lower risk weightage to smaller value loans and those which have adequate collateral to back the loan may make banks less risk-averse towards the realty sector.

The central bank has allowed firms to tap overseas funds through rupee-denominated bonds, which can throw open re-financing opportunities for firms that carry costly debt on their books. That may be why shares of DLF Ltd, a company strangled by huge debts and weak cash flows from business, shot up. The realty sector may see gains from rate cuts with a lag of a few quarters.

Regarding the capex cycle and capital goods, interest rate cuts should typically motivate firms to get into capacity expansion when the cost of capital falls. However, it all depends on demand and the utilization of existing capacities.

According to Nirav Sheth, research head, Edelweiss Securities Ltd, “In spite of the rate cut, which is a positive step, capex investment is still 12-18 months away as utilization level in the manufacturing sector is around 77%." Most sectors like power and cement are operating between 65% and 75% of capacity. The delayed recovery forecast for capital goods is seen in the sharp drop in the BSE Capital Goods index from July, as growth in manufacturing was challenged by poor monsoon rains and weak demand in the economy.

Nevertheless, in the best case scenario, if the repo rate cut is effectively transmitted to the consumer and helps boost consumption demand, it could lead to greater capacity utilization, which in turn will spur capital expenditure.