Dealing with the five stages of Brexit grief

A week after the Brexit vote, the markets, or at least equity markets, were feeling optimistic again

The reaction across financial markets towards ‘Brexit’ has been nothing short of bizarre. It almost reminds you of the five stages of grief laid down by the Kübler-Ross model—denial, anger, bargaining, depression and acceptance.

First there was denial. Only a few in the financial markets actually expected Britain to vote in favour of exiting the European Union. The markets were cruising along and the betting odds were heavily tilted towards a vote against an exit.

Then came the vote and Brexit became a reality. Markets threw a tantrum and a sell-off ensued. UK’s FTSE plunged 8% on the day the results came in but recovered even before the trading day had ended and closed 3% lower. The MSCI World Index fell 5% that day and India’s BSE Sensex fell a little more than 2%.

But the anger subsided soon enough.

A week after the Brexit vote, the markets, or at least equity markets, were feeling optimistic again. UK’s FTSE erased its Brexit day losses within five days as did the BSE Sensex. The MSCI World Index, though, is still trading about 3% below the levels it was at just before the vote. This was the bargaining phase in which the markets were trying to convince themselves of various scenarios. “Brexit may actually not happen as the referendum is not binding." “It may take years for Britain to actually exit." “The impact may be largely restricted to the UK and the Eurozone." These were some of the many theories doing the rounds which were helping the markets deal with their grief. 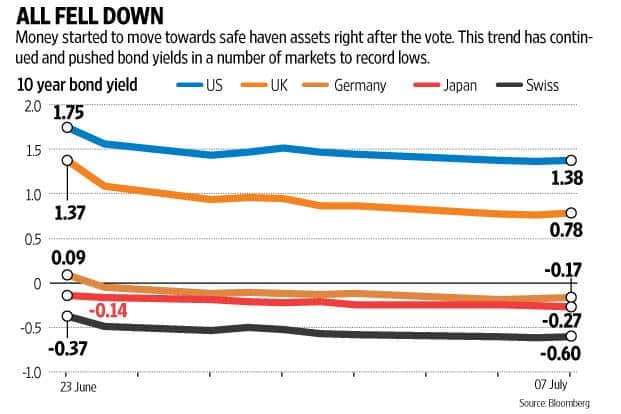 The first three phases now seem to be giving way to the fourth phase where depression is starting to creep back into the market’s psyche. Not surprisingly, the bond market, often the harbinger of bad news, is where the depression is hitting first.

Money had started to move towards safe haven assets right after the vote. This trend has continued (some would say accelerated) and pushed bond yields in a number of markets to record lows.

Across other geographies, a similar story has played out. The UK, German, Japanese and Swiss 10-year bond yields have all traded at record lows this week and fallen to levels no one had anticipated. The German, Japanese and Swiss 10-year bond yields are all now negative. As R. Sivakumar, head of fixed income at Axis Mutual Fund pointed out, the entire Swiss bond yield curve is now trading negative. Earlier this week, the 50-year Swiss bond yield also fell below zero.

According to a 29 June report from rating agency Fitch, “Investors’ flight to safe assets following the UK’s EU referendum on June 23 pushed the global total of sovereign debt with negative yields to $11.7 trillion as of June 27, up $1.3 trillion from the end-May total."

So, what is the message coming through from this fall in bond yields? Fitch says the message is that global growth is already shaky and Brexit adds another layer of uncertainty.

“Worries over the global growth outlook, further fueled by Brexit, have continued to support demand for higher-quality sovereign paper in June," Fitch said in its report. “Widespread adoption of unconventional monetary policies, including large-scale bond-buying programs and negative deposit rates, have driven the large increases in negative-yielding debt seen this year," it added.

In a 6 July Bloomberg article explaining the fall in US bond yields, Mohamed A. El-Erian, chief economic advisor at Allianz SE, wrote that the key concern is whether Brexit would amplify concerns over global growth.

“Concerns about sluggish growth abroad have been amplified in recent days by the outcome of the Brexit referendum, which adds unusual institutional uncertainties to already fragile economic conditions, a fluid financial situation and an imbalanced policy stance that is overreliant on central banks," wrote El-Erian. He, however, felt that negative spill-over of weaker growth in Britain and Europe to other large economies like the US would be limited.

The bond markets are not the only segment of the financial markets where the mood is looking grim. There are other segments that need to be watched closely. Some are related to Brexit and others not. In the UK, three property funds have been forced to freeze redemptions as investors sought to withdraw their money, fearing a sharp fall in UK commercial property prices.

Unrelated to Brexit, the pile-up of bad debt on the books of Italian banks is scaring investors. While the Italian banking problems existed well before Brexit, investors are fearing that lower government bond yields and any incremental weakness in growth in the region could tip the Italian banking sector into a full-blown crisis.

Which brings us to the final phase—acceptance. Over the weeks and months, investors will seek to wrap their heads around the timeline of Britain’s exit from the EU, the real economic impact of it, the financial market fallout and more. That phase, however, may be some time away and in the interim, the markets could be susceptible to some manic-depressive behaviour.