As of March 2016, only 6% of agricultural loans turned toxic while companies defaulted on a massive 14% of their loans

If one were to give a credit score to every Indian entity, will farmers score higher than companies? Are the tillers of land more disciplined than white-collar executives?

The popular perception is that it is not so. But a look at data from the Reserve Bank of India (RBI) shows that this is indeed the case. Chart 1 shows that as of March 2016, only 6% of agricultural loans turned toxic while companies defaulted on a massive 14% of their loans. The situation in 2016-17 is unlikely to be different. It is obvious that bad loans are rising everywhere given a broad slowdown in the economy. But the pace at which they are climbing is the fastest among companies and that is worrying. 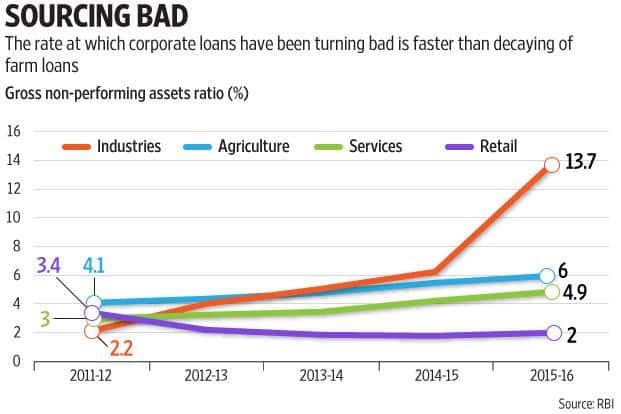 Companies are the biggest borrowers and a large chunk of public money flows into private enterprises through banks. By this yardstick, recovering money from companies should be the highest priority of lenders. This does not mean that banks should resign themselves to farm loan waivers that engender moral hazard.

There is no doubt that loan waivers undermine credit culture and no argument exists to counter the fact that waivers are merely palliative in nature. But so is the bulk of restructuring schemes that banks use to alleviate stress in corporate loans. In fact, the Reserve Bank of India (RBI) termed its own corporate restructuring schemes as band aids.

Any form of forbearance, whether loan waivers or restructuring, should be avoided. It is heartening that the RBI has put its foot down on forbearance, albeit only lately. 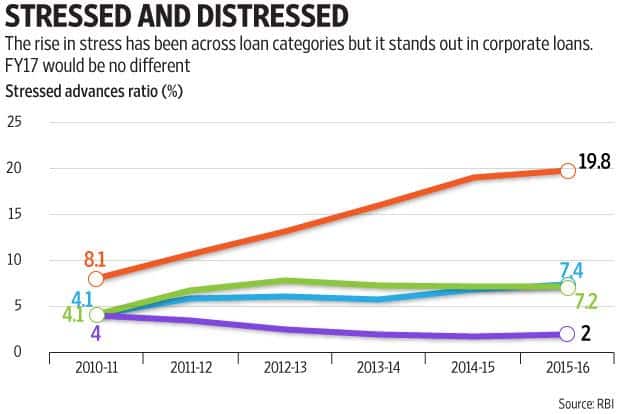 Going back to whether farmers are better re-payers than companies, Chart 2 details the stress levels in farm loans and that on corporate borrowings. Even in the worst drought years (2015), only 7.4% of agriculture loans were stressed. But nearly a fifth of the corporate loan book was under stress despite profit margins of companies showing some improvement in 2015-16. 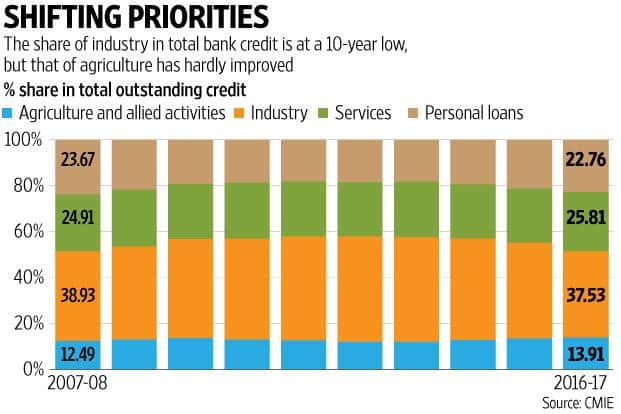 Farm loan waivers are forced by the State but corporate debt restructuring is a voluntary mechanism. The end result in both cases is that the bank takes the hit. For now, bankers have taken the first step by slowing credit flow to dodgy borrowers. Chart 3 shows that the share of industry in total bank credit was 37.3% as of 31 March, a 10-year low. But a point to be noted is that the share of agriculture in bank credit has hardly grown in a decade. Bankers may have turned unfriendly towards companies of late, but they were never friends of the farmer.

This is part two of a three-part series on the evolving situation in corporate credit quality. To read part one, click here.