Given India’s demographic advantage, betting on the education sector should be a no-brainer. But the March-quarter earnings of Educomp Solutions Ltd, Everonn Education Ltd and Career Point Ltd point to wasted opportunities. These stocks hit new yearly lows after their earnings announcements. Educomp and Everonn lost over 14% each in just two trading sessions.

The continuing deterioration in their core operational performances came as a surprise for investors. Firms in this sector have been restructuring their businesses for some time now. While their managements were expected to arrest the slippages in financial performance, the situation seems to be worsening.

Educomp reported a 35% year-on-year drop in revenue from operations, the biggest fall in over a year. The fall was led by the core school learning solutions business, which saw sales drop by more than half. That, in turn, led to a 99% contraction in earnings before interest and tax for this business. Everonn also continued its poor show. Income from operations plunged 83%. With fixed costs remaining the same, losses more than doubled to ₹ 69 crore.

Simply put, core businesses are increasingly coming under pressure due to intense competition and changing business economics, while stretched balance sheets are providing limited or no headroom to make new investments in service offerings. 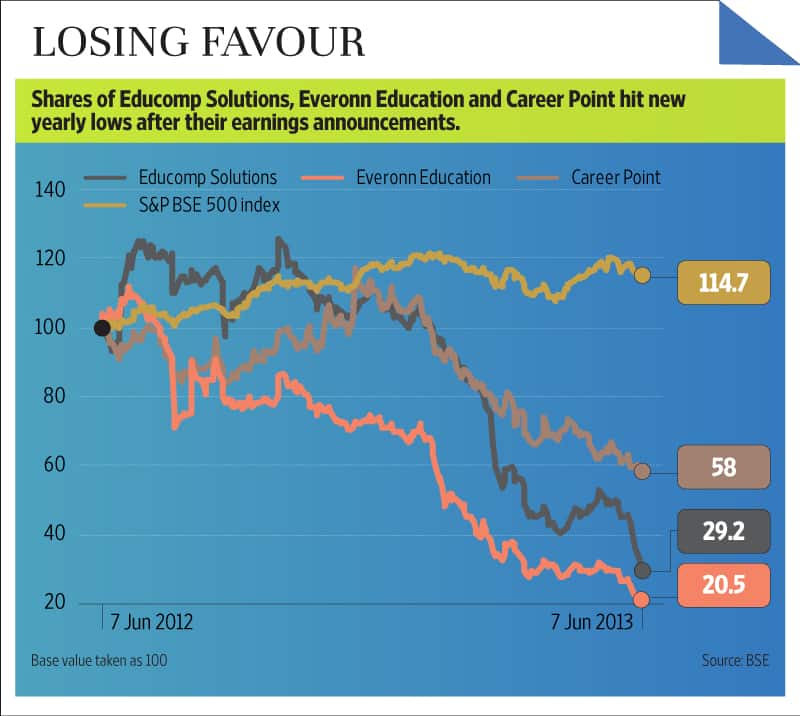 Career Point is focusing on formal education to reduce its dependence on the tutorial business. Changing examination patterns, high competition and poaching of faculty are putting pressure on its core tutorial business and operating margins are diving. It is also struggling to maintain positive momentum in enrolment. In the previous fiscal year, enrolment fell by 14%, the biggest drop in 10 years.

For Everonn, things are even tougher as it waits approval from the Madras high court for a restructuring. In any case, as the examples of other firms show, the restructuring process will likely be more painful than initially envisaged.