Mumbai: A four-day relief rally on the stock market ended abruptly on Wednesday after the chairman of Satyam Computer Services Ltd resigned with a confession of accounting fraud in India’s biggest corporate governance scandal. Satyam’s shares collapsed 78%, leading the bellwether Sensex index on the Bombay Stock Exchange (BSE) down 7.3%. 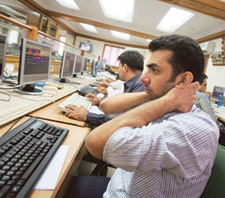 Shell-shocked: A broker reacts as he monitors the index on his computer terminal at a brokerage firm in Mumbai on Wednesday. India's main stock index dropped Wednesday as Satyan shares fell almost 80%. Punit Paranupe / Reuters

Satyam’s stock plunged to Rs30.70 in intra-day trade, its lowest since December 1998. The Hyderabad-based Satyam made its stock-market debut in November 1992.

It has a weightage of 0.15% in the broad-based 50-stock Nifty index of the National Stock Exchange, or NSE. NSE removed Satyam from its benchmark equity index after trading hours and Reliance Capital Ltd, part of the Reliance-Anil Dhirubhai Ambani Group, will replace it. Satyam has also been removed from NSE’s CNX 100 and CNX 500 indices.

“In light of today’s development at Satyam, BSE will take stock and an appropriate view." said Kalyan Bose, spokesman for the BSE, Asia’s oldest exchange.

The Financial Chronicle newspaper on Wednesday reported from Hyderabad that Satyam staff had bought more than 10 million shares in an expression of solidarity after an email request by management. At Tuesday’s price, the acquisition cost could have been Rs140 crore. This means Satyam staff have taken a Rs100 crore hit.

While most brokerages dropped coverage of the stock, some termed the scandal India’s own version of the massive accounting fraud at Enron Corp. that led to the collapse of the US company.

“Considering the size of India’s equity market and that Satyam is part of Sensex 30, the scandal is bigger than Enron for the domestic markets," said a Mumbai-based hedge fund manger, who didn’t want to be named because he is not authorized to speak to the media.

“Many market darlings have got themselves involved in aggressive accounting to play with the momentum," said Saurabh Mukherjea, head of Indian equities at UK-based research house Noble Group.

The Satyam scandal stopped a rally that began on New Year’s day. Most top Asian equity strategists had predicted a strong showing by Indian stocks in the short term. “I see more upside to India as it has underperformed China 43% since the 27 October low,"said Clive McDonnell, head of equity strategy at BNP Paribas Securities (Asia) Ltd, in a 7 January “Alpha Strategy" report.

India is currently the only equity market across the 20 in Asia tracked by Bloomberg to show negative returns this year so far.

The rise of Infosys, Hindustan Unilever Ltd, Wipro and a few other well-managed blue-chip companies in the falling market lent credence to analysts who say investors’ focus will be as much on corporate governance as earnings growth. Looking at the brighter side, “this scandal will trigger tighter regulations on accounting practices," said Akhil Hirani, managing partner at Mumbai-based law firm Majmudar and Co.