Total flow of funds to firms contracts, bank borrowings fall off the map in June quarter

The Reserve Bank of India’s (RBI) annual report contains another nugget of information that shows up the dismal state of the economy in the June quarter. The total flow of funds to the commercial sector declined by Rs27,300 crore during the first quarter of the current fiscal year (FY18), which shows that companies paid off past debt rather than borrow. 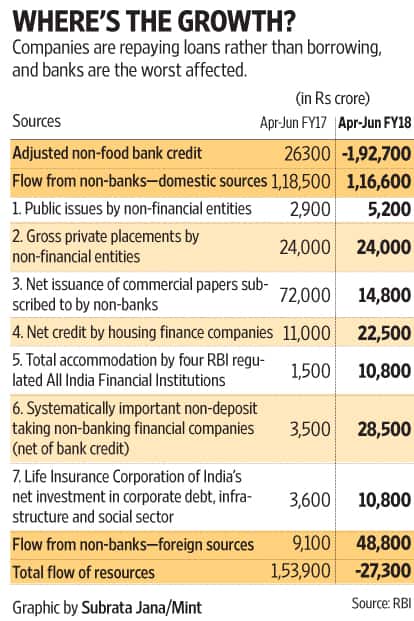 The sharpest fall is indeed that of the banking sector loans, as it showed a drop of a massive Rs1.9 trillion during the three months ended 30 June even after including bank investments into corporate bonds and commercial papers. Given that the Indian economy is largely bank-led, this corroborates with the dismal gross domestic product data that showed the economy grew by 5.7% in the April-June period and manufacturing continued to languish.

Banks feature nowhere in companies’ borrowings. In fact, companies are paying off banks and choosing to borrow from elsewhere. But if we look at the individual sources of funds from where companies raise money, the picture is not that dire, apart from bank credit.

Funds flow through the domestic non-banking channel also fell compared to the year ago. But credit growth from non-banking financial companies (NBFC) and Life Insurance Corporation of India (LIC) was substantial. NBFCs lent seven times more than the previous year while LIC’s accommodation through mandated investments in infrastructure as well as bond purchases more than doubled.

NBFCs have been ramping up their lending business for more than three years now. The incremental lending to companies by NBFCs grew by 48% in FY17. Lending by apex financial institutions such as the National Bank for Agriculture and Rural Development, Small Industries Development Bank of India and National Housing Bank also soared during April-June of the current fiscal year. Companies also preferred bonds and the amount raised during the three months (Rs24,000 crore) was comparable to the previous fiscal year.

But foreign direct investment was much higher than in the comparable period of last year, resulting in a flow of Rs47,700 crore into Indian companies, a growth of 70%.

Although the first quarter is seasonally lean for borrowings, it is clear that firms are preferring non-bank sources to fund their operations. Banks will perhaps have to contend with another disappointing year of growth even as they battle their bad loan stock.