Thanks for Visiting Mint
You seem to have an Ad Blocker on. Please turn it off in order to continue, or whitelist Mint
HOW TO TURN OFF AD BLOCKER
OR
REFRESH IF YOU ALREADY TURNED OFF THE AD BLOCKER
Home >Market >Mark-to-market >TCS continues to struggle for growth

TCS continues to struggle for growth 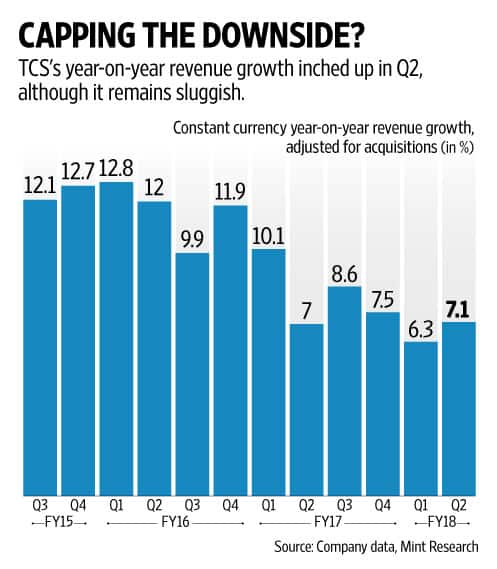 On the positive side, operating margin expanded 1.7 percentage points sequentially, exceeding analysts’ estimates. But a significant part of the gain in the operating margin is driven by cross-currency benefits. Volume growth came in at 3.2%, which was also decent; although ultimately what matters is revenue growth, especially given the challenges on that front in recent years. Further, a revenue growth of 1.7% on 3.2% volume growth indicates greater-than-expected pricing decline.

Business in continental Europe is gaining traction, reflective in higher than company average growth of 5.3% last quarter; but the mainstay US market was below the company average.

Business in North America which generates more than half of TCS’s revenues remained soft as banking financial services and insurance (BFSI) vertical continued to lag. Another important vertical, retail, reported a sequential decline in revenues. This is in contrast with Accenture Plc, which recently reported that its BFSI and retail verticals grew at a pace that was higher than the company average.

It is difficult to say when the deal momentum will pick-up; more clarity is expected to emerge by the end of next quarter when budgets for the next year are finalized.

Besides, the challenge is, while the digital solutions business is doing well, it isn’t large enough to offset the slowdown in the traditional business.

As an analyst with a domestic broking firm pointed out, it provides no major comfort as the legacy or the bread-and-butter business which generates roughly 80% of the TCS revenues is still growing in low single digits.

According to the management, even though the deal sizes are getting bigger, the segment by and large is still made of smaller deals. Overall that reflects the challenge for TCS. While the core legacy business is seeing subdued growth, the digital business is yet to grow big enough.