Mumbai: In a move that could add to the burden of treasury losses for banks, the Reserve Bank of India (RBI) on Wednesday announced that the securities issued by each state government should be valued at the market price as against the uniform pricing currently prevalent. The move will also allow banks and other institutional investors to differentiate between states based on their financial performance which is likely to induce more competition among the states. 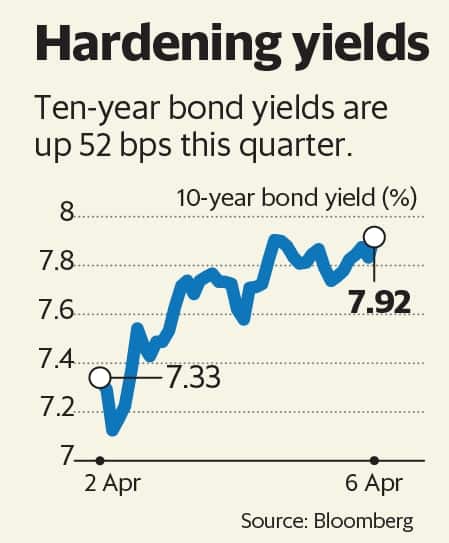 “It has now been decided that the securities issued by each state government should be valued based on observed prices. The valuation of traded state government securities shall be at the price at which they have been traded in the market," RBI stated in a press release.

Detailed guidelines will be issued by 20 June.

“There may be a negative impact on bank balance sheets in the near term on account of State Development Loans (SDL) valuation change due to rise in yields. Over a period of time, however, investors will start differentiating between states based on their performance metrics. Till now there was no incentive to differentiate between good and poorly managed states which is set to change with the new regulations coming in," said A. Prasanna, chief economist at ICICI Securities Primary Dealership.

The central bank, however, in another announcement also gave a breather to the banks by allowing them to further spread out their treasury or mark-to-market losses for the April-June quarter over the next four quarters beginning 30 June, taking into consideration the continuous hardening of yields. Bond prices and yields are inversely related. For the current quarter April-June 10-year Gsec yield rose 52bps to 7.917.

To be sure, in a circular released on 2 April, the regulator had allowed banks to spread out their losses for the December-March quarter over the next four quarters as well. It had also directed the banks to create an investment fluctuation reserve of 2% of their holdings in the available for sale (AFS) and held for trading (HFT) portfolio to protect against the mark-to-market (MTM) losses.

“In the view of continuing rise in yield of government securities and also the inadequacy of time to build IFR for many banks, it has been decided to grant banks the option to spread the MTM losses on investments held in AFS and HFT portfolio for the quarter ending 30 June, 2018 equally over a period of four quarters," RBI said on Wednesday. A separate circular will be issued in this regard within a week.

In another move which could reduce the pressure on short term rates is the increase in the inclusion of securities held for the purpose maintaining statutory liquidity ratio (SLR) while reckoning liquidity coverage ratio. Banks will now be allowed to include 11% of bonds held under SLR for the calculation of LCR. According to the roadmap laid out by the central bank for implementing the liquidity norms under Basel III, banks will be required to maintain a minimum LCR of 100% by 1 January 2019.

“As far as additonal carve out from SLR is concerned, it will take away pressure from banks which do not have excess SLR. It can both have an impact on the short end gsecs as well as on CDs as the pressure to buy short term securities and to borrow short term will ease," said Prasanna.