Among Nifty 50 stocks, the largest consensus earnings estimate cut for financial year 2017 over the past month was recorded by Idea Cellular Ltd of about -24.7%. That was followed by Coal India Ltd, Tata Motors Ltd, UltraTech Cement Ltd and Ambuja Cements Ltd (see table). 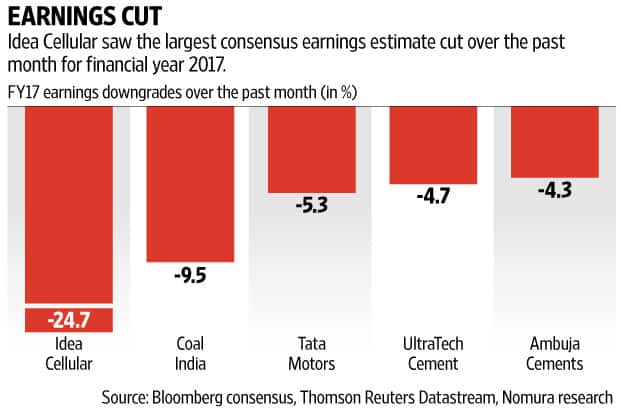 The market earnings multiple has increased to 15.54 times versus 15.34 times a month ago, said Nomura, adding, “the market is trading at a 9.3% discount to its five-year average."

In a possible reprieve for power equipment suppliers hit by an investment slowdown in the thermal sector, the government has in principle approved a proposal to replace 11,000 megawatt (MW) of thermal power plants older than 25 years. The plants will be replaced with energy-efficient super-critical plants in about five years at a cost of around Rs50,000 crore, the ministry of power said in a year-end review note.

Till September 2016, a total of 3,000 MW of inefficient thermal generating capacities had been retired. The government is pushing for the reconfiguration of older power plants as these are less cost-efficient and have higher emissions.

November was the fifth consecutive month that passenger growth in the Indian aviation industry was significantly higher than capacity growth.

According to ICICI Securities, without major plans for near-term capacity addition amid a high passenger growth, the benefits from lower yields will begin to wane for airlines. 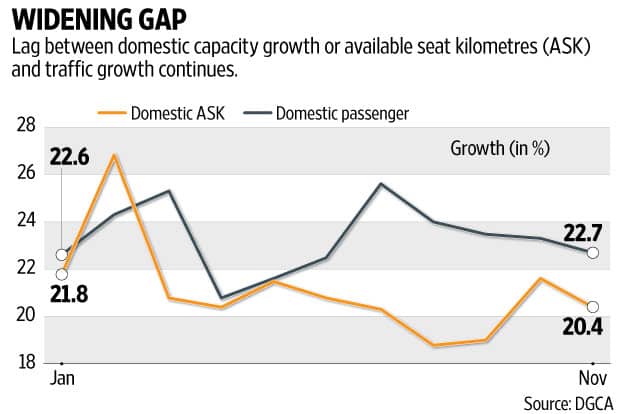 IndiGo (InterGlobe Aviation Ltd) could be an exception as it has seen significant improvement in its passenger load factor (PLFs) starting in Q3FY17. PLF measures the capacity utilization of public transport services.

Rising crude oil prices could add further pain. On a year-on-year basis, for Indian domestic aviation as a whole, PLFs have been higher while yields have largely remained weak, the report added.