Between April and August, exports fared better than sales volumes of motorcycles

Competition is hotting up in the two-wheeler market. Global firms with deep pockets are betting on the long-term Indian consumption story and quickly garnering a share of the pie. Given this trend, Bajaj Auto Ltd’s tie-up with Japan’s Kawasaki Motors Corp. is aimed at widening its reach in the ASEAN (Association of South East Asian Nations) region and boosting exports. Eventually, this could offset any cyclical slowdown seen in domestic markets.

Bajaj Auto’s August motorcycle sales fell by 14% in the domestic market from the year-ago period. Export volumes in comparison were down only 2%. Between April and August, sales volumes of motorcycles contracted marginally, while exports fared better in comparison.

Further, the partnership with Kawasaki since 2004 has helped garner a 45% share of the market in the Philippines. With this tie-up, Bajaj hopes to turn around its loss-making subsidiary in Indonesia, too. According to analysts, China and Indonesia account for nearly two-thirds of the world’s two-wheelers sold. So far, Japanese motorcycles have been successful in Indonesia, while Indian entities (even TVS Motor Co. Ltd) are bleeding. 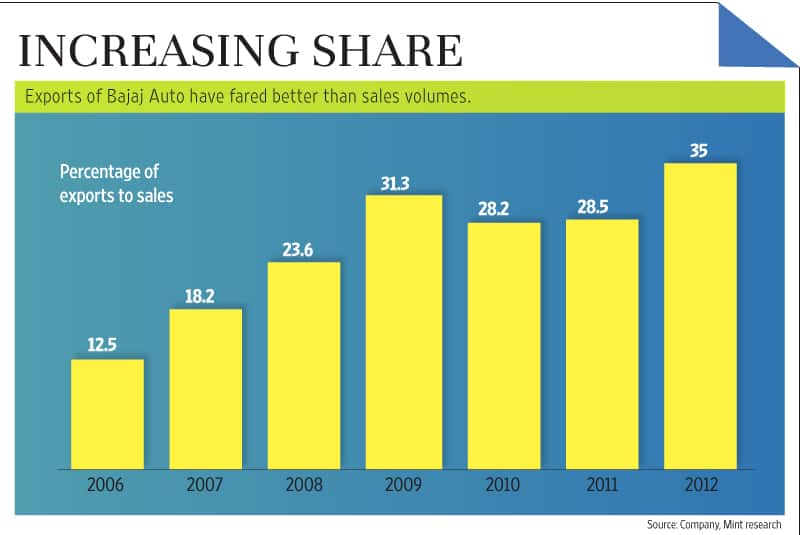 “Higher exports will help sustain Bajaj Auto’s valuation just as its diversified nature, with a mix of three-wheelers, has," says Umesh Karne, analyst, Brics Securities Ltd. From around 12.5% of sales in 2006, Bajaj’s exports now comprise around one-third of its revenue. The motorcycle maker exports to 35 countries and enjoys a leadership position in 12 of them. Africa is its largest market (41% of total exports), followed by Asia and Latin America. Bajaj Auto also has a 47% stake in Austrian KTM, a company which Bajaj uses to tap developed markets and gain technological prowess.

To compare with peers, motorcycle market leader Hero MotoCorp Ltd’s shares saw a derating when its Japanese partner Honda Motor Co. Ltd severed ties, and following intense competition on home turf. According to a report by Karvy Stock Broking Ltd, “Bajaj Auto Ltd (BAL) is comparatively well-placed with rising contribution of exports to overall volume, and enjoys a strong possibility of a re-rating. We expect BAL to trade at a one year forward P/E (price to earnings) multiple of 14.5 times instead of its historical average of 13 times." Perhaps that is why the stock is holding out during tough times.