Thanks for Visiting Mint
You seem to have an Ad Blocker on. Please turn it off in order to continue, or whitelist Mint
HOW TO TURN OFF AD BLOCKER
OR
REFRESH IF YOU ALREADY TURNED OFF THE AD BLOCKER
Home >Market >Mark-to-market >Will consumption growth continue to prop up the economy?

Will consumption growth continue to prop up the economy?

Rural demand is expected to improve but companies' fears lie in the supply chain, which has broken down, especially for firms who depend on wholesalers as the government's crackdown on cash transactions has affected them

India’s economy slowed down in the March quarter, pushing out gross domestic product (GDP) growth of only 5.6%. This number, too, was lopsided, with private consumption contributing to two-thirds of it. Private capital formation was affected by low investment appetite. The onus of growth in the near to medium term, therefore, appears to rest on the slender shoulders of consumption.

The fast-moving consumer goods (FMCG) sector is one pillar of consumption in both urban and rural areas. How did the industry fare in the March quarter? If we exclude cigarette and liquor firms, then aggregate results data show that growth slipped to 2.9% in the March quarter over a year ago. Taking half year results, the second half of FY17 saw sales growth of 3.6%, compared with 8% in the first half. These are consolidated figures and include overseas sales, too. 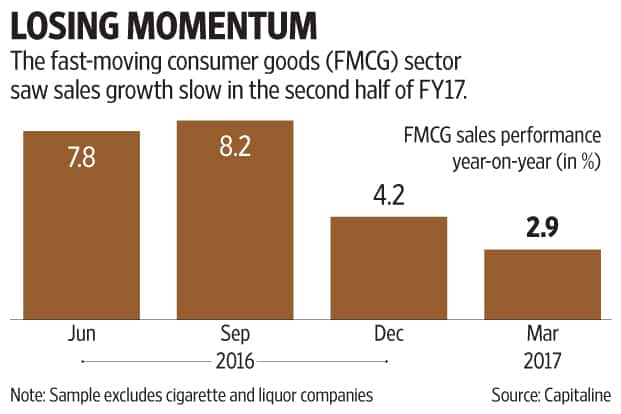 Urban markets are in much better shape. One, they recovered faster than rural markets did from the after-effects of demonetization. Also, urban growth was ahead even earlier. Rural growth had begun to recover in October, following a good monsoon, but demonetization played spoilsport.

Rural demand is expected to improve but companies’ fears lie in the supply chain. The rural distribution chain has broken down, especially for firms who depend on wholesalers. The government’s crackdown on cash transactions has affected them. Some are confident that underlying demand will force these cash-dependent firms to change their ways of doing business.

The external news is good. FY18’s monsoon predictions are normal. News about farmer agitations does put a question mark on whether higher output can be beneficial if farm prices decline. Also, a major source of non-farm work—real estate activity—was affected in the March quarter.

What next? The goods and services tax (GST) is the next challenge in the first half of FY18. Firms are expecting sales to get affected as pipeline inventory will come down. The challenge for rural wholesalers may increase.

The opportunity lies in potential savings on tax, combined with cost savings if firms restructure operations. GST may see more consumers shifting to branded products, which will expand the market for the organized sector. Even then, 50% of the population accounts for only 10% of consumption, according to HUL.