Investors have been disappointed because of intense competition, which has resulted in low return on equity

Telecom stocks have provided investors healthy returns in certain time periods; although for some time now, returns have been underwhelming. Shares of Bharti Airtel Ltd, the largest company by market capitalisation in the sector, have risen at an annual average rate of 6.6% in the past 10 years. In comparison, the Nifty 50 index has risen by 8.4%. Idea Cellular Ltd’s shares have underperformed the broad markets by a similar margin since its initial public offering in early 2007 (see chart).

Investors have been disappointed because of intense competition, which has resulted in low return on equity (RoE). Bharti’s RoE, for instance, hovers around a meagre 7-8%.

March quarter results of Airtel suggest competitive pressures have eased—voice traffic on its network grew in double digits, for the first time in over 12 quarters. However, with the impending entry of Reliance Jio Infocomm Ltd, competitive intensity may soon increase again.

The only hope for making good enough returns from the sector is if things don’t turn out to be as bad as expected in terms of profit growth opportunities. 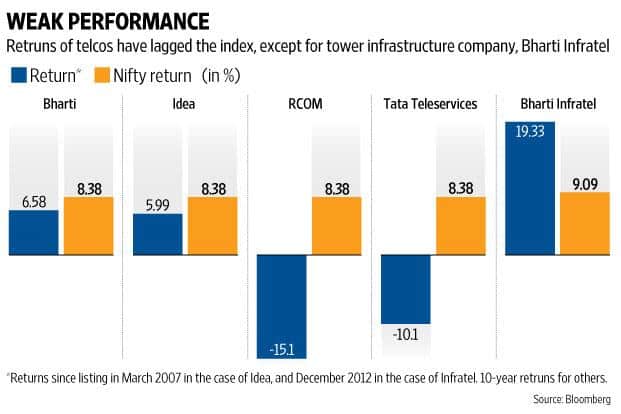 Some analysts, for instance, believe that since Reliance Jio has invested 1.5 trillion in the telecom business already, it might adopt a pricing strategy that doesn’t result in monumental cash burn. If pricing isn’t disrupted materially, incumbents such as Bharti, Idea and Vodafone India Ltd (which has begun preparations for an IPO) will be fairly well placed. Bharti, in particular, has acquired 3G and 4G spectrum in most of its key circles, and is expected to do well in the data business. In fact, this is one of the reasons the Bharti stock has risen by 8% this year, even while shares of Idea have fallen by over 17%.

Essentially, a bet on Indian telcos is a call that Jio’s launch will not be substantially detrimental to their fortunes. Also, companies with better spectrum resources are better placed to capture the data opportunity. Reliance Communications Ltd’s shares have eroded value at an enormous rate, and it’s best for investors to remain cautious about this counter.

The performance of Bharti Infratel Ltd’s shares since listing, meanwhile, shows that tower companies have provided far better returns to shareholders. RoE of the company stands at 14-15%, and it enjoys an enterprise value/earnings before interest, tax, depreciation, and amortisation (Ebidta) valuation of over 13 times, nearly double that of Bharti Airtel and Idea Cellular.

Lately, with telecom companies increasing capital expenditure and investing in their networks, investors have been enthused about prospects of tower companies. Be that as it may, the growth in tenancy rates of Bharti Infratel’s towers hasn’t been huge, and expectations on this front may need to be tempered.

The company also enjoys a scarcity premium because of the inordinate delay in the IPO of Indus Towers; some of this advantage may fade away if and when Indus goes ahead with an IPO.