By how much have banks passed on the repo rate cut to their customers?

While banks have been quick to reduce deposit rates, they have been tardy about bringing down lending rates

Both the Reserve Bank of India (RBI) and corporate borrowers have complained that the reduction in the central bank’s policy rate has not been passed on to borrowers by the banks. The RBI annual report contains the details of the extent to which banks have transmitted the cut in the repo rate to different categories of borrowers. The accompanying chart gives the picture.

Note that while banks have been quick to reduce deposit rates, they have been tardy about bringing down lending rates. Overall, the weighted average lending rate (WALR) on outstanding rupee loans fell by 0.65 percentage points by June 2016 from December 2014. 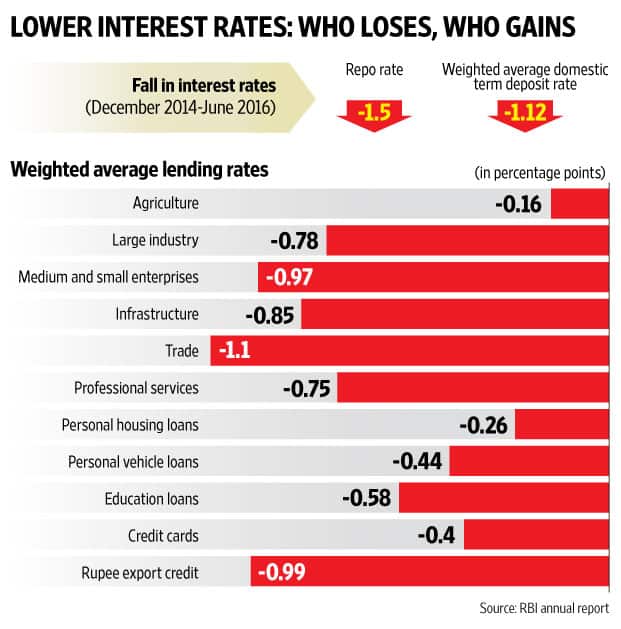 The report says that there has hardly been any transmission of a reduction in the policy rate to the actual lending rates charged to customers during 2016-17 so far (up to June). The reasons: “banks may have been loading (i) a higher credit risk premia on their new customers in order to attain their desired return on net worth in a rising NPA (non-performing asset) environment; and/or (ii) a higher strategic risk premia on their riskier loans as part of their business strategy to reorient their lending operations towards less risky activities. The consequent rise in the spread is reflected in a near unchanged WALR in respect of both outstanding and fresh rupee loans during 2016-17 so far (up to June)."

In short, a key reason for the lack of transmission is the huge amount of bad loans sitting on banks’ books.