Thanks for Visiting Mint
You seem to have an Ad Blocker on. Please turn it off in order to continue, or whitelist Mint
HOW TO TURN OFF AD BLOCKER
OR
REFRESH IF YOU ALREADY TURNED OFF THE AD BLOCKER
Home >Market >Mark-to-market >Frauds are a growth industry in Indian banking

Frauds are a growth industry in Indian banking

The CIBIL database has details of wilful defaulters (a euphemism for those who have defrauded banks) with loans outstanding of over Rs25 lakh, in which lawsuits have been filed. The total amount outstanding of these suit-filed accounts has gone up from Rs28,416.93 crore as of 30 September 2013 to Rs1.11 trillion four years later, as of 30 September 2017. That works out to a compounded annual growth rate (CAGR) of 40.82%. Clearly, frauds are a growth industry. 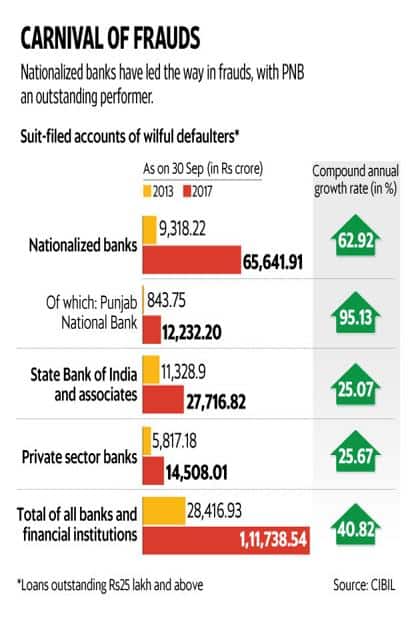 As of 30 September 2013, nationalised banks accounted for 32.8% of the total amount outstanding in these wilful defaulter accounts. Four years later, their share had gone up to 58.7%. The CAGR of the amounts in these accounts with nationalized banks was a staggering 62.92%. For Punjab National Bank (PNB), the CAGR was an eye-popping 95.13%.

For State Bank of India and its associates, the CAGR of dues in these accounts over these four years was 25.07%. For banks in the private sector, the CAGR was 25.67%. The amount for foreign banks is too small to be material to the overall figures.

The question is: will these numbers goad the government and the regulator into action, resulting in a complete overhaul of corporate governance in banks, or, once the hoopla over the PNB fraud dies down, will it be back to business as usual?