Why govt should revisit move to limit marketing margins of OMCs

Valuations of Indian Oil, BPCL and HPCL continue to remain depressed even after a sharp drop in crude oil prices

Increased earnings unpredictability had forced investors to start looking at price-to-book valuation multiples compared to price-to-earnings multiples, and visibility remains poor. In this backdrop, an announcement stating that the absorption of marketing margins is revoked would help in improving sentiment and accordingly, valuations.

Sure, Indian Oil, BPCL and HPCL share prices have recuperated some of the losses seen in early October, thanks to the fall in crude oil prices. The stocks are now down 10-15%. 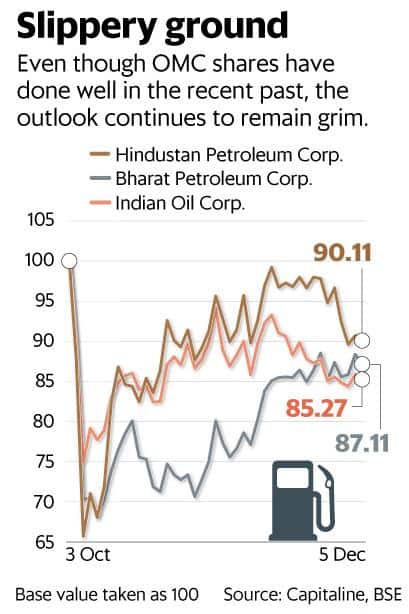 Brent crude prices were $86 a barrel on 3 October and are now 28% lower. Lower crude oil prices raise possibilities for OMCs to recover some of their marketing margin losses.

“Although there was no clarity as to when the OMCs would be able to raise their marketing margins," added the brokerage firm.

Outlook for these stocks continues to remain grim. As analysts from Jefferies India Pvt. Ltd point out, with elections underway in five states, the general election due in 2019 and the government instructing OMCs to absorb lower margins, the margin gains may prove illusory especially if the fall in crude oil prices is transient.

No wonder then, OMC stocks have only recovered partially from the October massacre. One must also remember that even before the October news flow, these stocks had underperformed the Sensex for at least a year.

Meanwhile, under-recovery on cooking gas and kerosene sales for this fiscal year is expected to top the budget provision of about ₹ 21,000 crore. Assuming Brent crude at about $70 a barrel for the rest of FY19, analysts at Jefferies India estimate the under-recovery at about ₹ 39,000 crore.

“With the fiscal space also narrowing elsewhere, we model upstream state-owned enterprises sharing the burden but the OMCs may too," the analysts wrote in a 14 November report.

Simply put, the uncertainty surrounding the earnings predictability of these companies continues. In fact, large movements in crude oil prices in a short span of time, as witnessed in the recent past, make it all the more challenging for investors to forecast earnings of these companies. From a near-term perspective, the forthcoming meetings of the Organization of the Petroleum Exporting Countries (Opec) and friends should likely offer meaningful clues on the direction of oil prices. A decision to cut oil production would offer upward support to the prices.

For now, the recent recovery in shares of OMCs can at best be treated as a temporary relief and definitely not as a factor to drive a re-rating of these shares.

Pallavi Pengonda is a financial journalist producing cutting edge commentary and analysis on companies, economy and market trends. Over her journalism career spanning more than 14 years, she has covered topics across sectors such as oil & gas, consumer, aviation and new age tech companies. She heads the Mark to Market team and joined Mint in June 2010. She lives in Bengaluru. She is an art enthusiast and likes to paint in her leisure time.
Read more from this author
Catch all the Business News, Market News, Breaking News Events and Latest News Updates on Live Mint. Download The Mint News App to get Daily Market Updates.
More Less
Topics
mint-india-wire
OPEN IN APP