Reliance Jio Infocomm Ltd was in a league of its own in the December quarter (Q3). It reported a 12% sequential increase in revenue, much the opposite of the 12-13% decline in revenues reported by other large telcos. Of course, there’s another less charitable league table Reliance Jio has topped—cash burn, but more on that later.

It’s worthwhile noting that about 90% of the increase in Reliance Jio’s operating profit was on account of a regulatory win and the resulting savings in interconnection usage charges (IUC).

The Telecom Regulatory Authority of India (Trai) cut IUC by 57% from 1 October, which also resulted in a sizeable revenue loss for incumbents. “That the incumbents failed to convince Trai on the merits of their stance versus Reliance Jio’s stance on IUC qualifies as a major setback, in our view. In the ultra-competitive battlefield of India wireless, covering all flanks is critical…incumbents’ inability to prevent regulatory shocks is disappointing," Rohit Chordia, an analyst at Kotak Institutional Equities, wrote in a note to clients.

Riding piggyback on the IUC cut, Reliance Jio reported a pre-tax profit of Rs772 crore in Q3, compared to a loss of Rs414 crore in the preceding quarter. Airtel’s fortunes swung in the opposite direction. It reported a pre-tax loss of around Rs933 crore for its India wireless business in the December quarter; in Q2, it had made a profit of Rs38 crore. Idea was already deep in the red and its losses expanded to Rs2,067 crore. Any discussion on Reliance Jio profit must note that the company’s accounting policy differs significantly from peers. The new entrant continues to capitalize some of its expenses, and follows a unique depreciation policy, which analysts point out understates costs.

“Cash flow is probably better to look at and compare with peers; profit and loss statements cannot be compared when cost accounting policies are so different between Jio and peers," analysts at JPMorgan said in a note to clients last month.

On this measure, all telcos are bleeding. But Reliance Jio is burning way more cash than others. The IUC cut helped cut cash outflow from ~Rs6,200 crore in Q2 to ~Rs5,000 crore last quarter. Even so, this is more than the combined cash outflow of around Rs4,200 crore of Airtel and Idea. Both companies cut capex to curtail cash outflow. 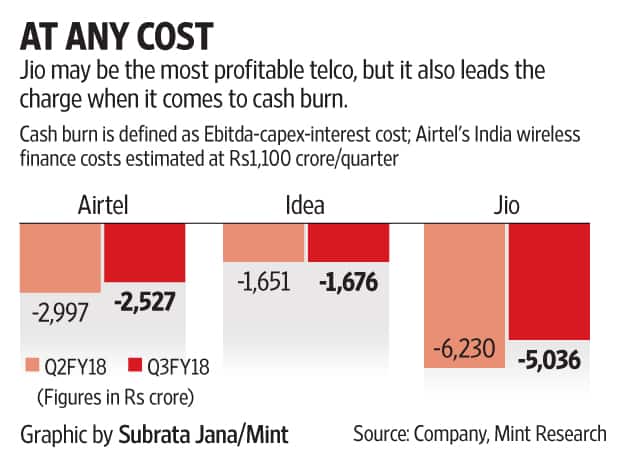 Reliance Jio’s high level of cash burn is largely because investments in its network are running ahead of others; but as pointed out earlier, it is also because of capitalization of expenses, which find their way into the cash outflow metrics.

With Reliance Jio having stepped up its aggression on the pricing front in January, the levels of cash burn will worsen for the industry in the March quarter.

Against this gory backdrop, it isn’t surprising that Vodafone and Idea are attempting to appease Reliance Jio with their post-results statements. “We will keep a reasonable distance (from Jio’s tariffs)," Idea’s management said on a call with analysts, seemingly in response to Jio’s complaints that incumbents had dared to match its tariffs in Q3. Vodafone squarely blamed Airtel for the bloodbath and absolved Reliance Jio. “The competitive environment (in India) remains extremely intense, with the market-leader increasing the competitiveness of its tariffs, despite price rises by the new entrant," it told its investors.

Sadly for them, Reliance Jio seems to be in no mood to relent.