Metal prices are taking a beating. Prices of copper have declined 7.3% since early-March and those of zinc have fallen by 9.5%, but aluminium is doing relatively better with a decline of 2.4%. A number of reasons are behind the weakness. China’s efforts to tighten liquidity conditions to cool its asset markets may be one of the reasons for the falling metal prices. The US economy continues to strengthen and points towards tighter interest rates. Worries over the Chinese economy and the possibility that growth may turn slower could also be worrying investors. Aluminium did better than copper and zinc, chiefly due to China promising to stop output from polluting units. 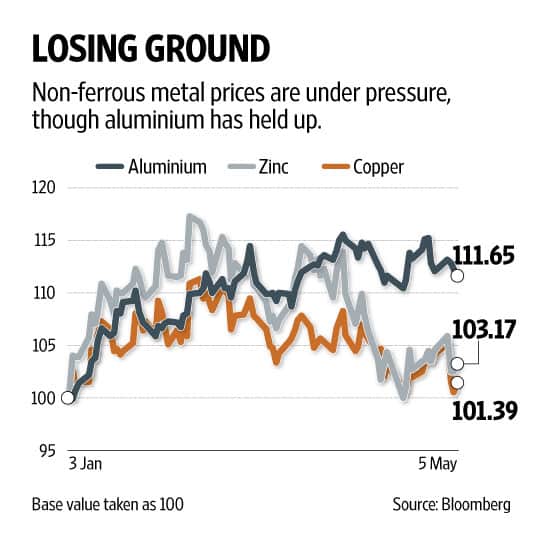 As banks are going tooth and nail to garner market share in affordable housing, mortgage-backed securities (MBS) or pools of mortgage loans packed together, are hot commodity. Rating agency Crisil Ltd notes that MBS volume hit an all-time high of Rs29,400 crore in fiscal year 2016—up a whopping 86% over the previous year—and are rising. “In just the half-year ended September 30, 2016, volumes had surpassed 69% of the full-year fiscal 2016 volumes," Crisil said in a note. Volumes in the third quarter were muted on account of demonetization, but picked up again in the fourth quarter. Buyers of MBS are largely banks, while sellers are typically housing finance companies. It’s come to this for the beleaguered oil market: a big bet that prices are about to sink to their lowest level in more than a year. About $7 million worth of options changed hands on Friday that will pay off if West Texas Intermediate (WTI) crude falls beneath $39 a barrel by mid-July, according to data compiled by Bloomberg. WTI, which hovered around $46 on Friday, hasn’t traded below $39 since April 2016, though it’s been dropping like a stone in recent weeks. More than 14,000 August $39 puts changed hands, almost 20 times the number of contracts previously outstanding for the bearish option. Prices have plunged about 13% in the last three weeks, amid fears that the Organization of the Petroleum Exporting Countries-led production cuts aren’t doing enough to stem a global supply glut. Bloomberg