There has been a rising prevalence of lifestyle disorders among young professionals in the age group of 23-35 years. A survey conducted by Bajaj Allianz General Insurance Co. Ltd, Lifestyle and health insurance, found that its claims data reiterated the fact. It showed that close to 25% of the company’s health claims came from this particular age-group.

Moreover, it was found that most young professionals depend solely on employer-provided mediclaim and do not have a personal health cover. This survey was conducted last month where 1,100 working professionals in the age group of 23-35 years in New Delhi, Mumbai, Kolkata, Chennai, Bengaluru, Pune, Hyderabad, Gurgaon and Goa, participated.

Here are some key findings from the survey. 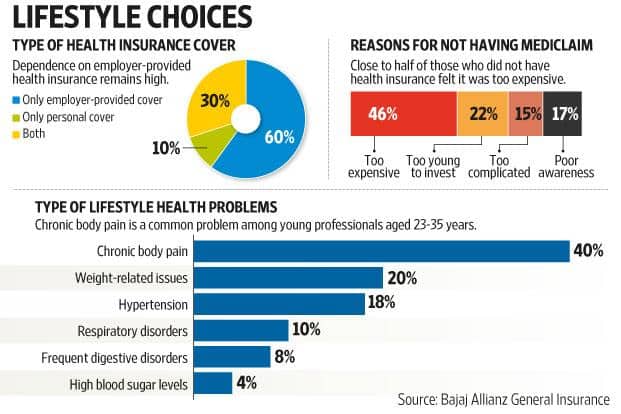 It was found that nearly half of the respondents (45%), suffered from lifestyle related disorders. Among those who said they were affected, 40% said they suffered from chronic body pain (muscle spasms, joint pain, chronic backache), 20% had weight-related issues (obesity) and 18% suffered from hypertension, 10% from respiratory disorders, 8% from frequent digestive disorders and 4% said they had high blood sugar levels (diabetes).

Most companies today provide health cover to their employees. But many people make the mistake of being satisfied with that. They do not know the details of the cover provided and assume it to be enough. The study indicated a similar trend among young professionals as well.

The percentage of respondents who had their personal health insurance cover was a low 10%.

The main purpose for having their own health insurance policy was not the insurance benefits but the tax benefits. Among those with their own health covers, 76% said they had availed it for tax saving purposes, while the remaining 24% said they bought it as a financial security net against medical conditions.

The professionals surveyed who only had employer-provided health cover said they felt the cover provided by their employer was sufficient to take care of their medical expenses.

One of the reasons cited for not having personal mediclaim policies was that they were perceived to be expensive. Of those who did not have health insurance, almost half (46%) said they felt it was an expensive instrument to buy.

In fact, 22% felt they were too young to invest in such a cover. Other reasons included that the product was too complicated (15%) and lack of awareness about health insurance (17%).

The results of the study indicate that awareness of the benefits of an adequate personal health insurance policy is not enough, especially given that health expenses can be overwhelming. Dependence on employer remains high.