Jabong may be Flipkart’s best investment yet

After buying Jabong, Flipkart now has a share of well over 50% in the online fashion retail market

Of all the money Flipkart Ltd has spent on growing its business, the $70 million outlay for Jabong is likely to provide the most bang for its buck. Thanks to this purchase, there is no major competitor left in the fashion and apparel segment. Flipkart now has a share of well over 50% in this market, largely through Myntra, which it acquired a little over two years ago, and Jabong.

Of course, it still has to contend with Amazon India, which runs a fashion segment on its portal. However, a typical apparel customer tends to prefer specialized platforms such as Myntra and Jabong. In fact, as an analyst at a domestic institutional brokerage firm points out, it’s surprising that Amazon didn’t pursue the deal, given the low valuations. For that matter, Flipkart should consider itself fortunate that none of the other contenders such as Snapdeal walked away with Jabong.

The acquisition price of $70 million looks like a small price to pay for reducing competition in this important segment. The fashion and apparel segment enjoys the highest gross margins globally among all e-commerce business segments. Note that Jabong has been valued at only around 0.5 times revenue for the year till March 2016.

According to an analyst with a multinational brokerage firm, the acquisition may well prop up Flipkart’s overall valuation if investors assign a similar value to Jabong as they do to Myntra. But this exercise is meaningless unless Flipkart manages a successful fund-raising using this new valuation prop.

What matters more is how quickly and how well it integrates Jabong’s operations and improves profitability of its entire apparel business. Thankfully, unlike the time when Flipkart acquired Myntra, there was some mention about cost synergies in the company’s commentary on Tuesday. Myntra’s chief executive officer, Ananth Narayanan, says the focus will be on healthy, profitable growth.

This ties in with what most Indian e-commerce companies have been doing since last year, although, of course, they are still a long way off from being profitable or cash-flow positive. 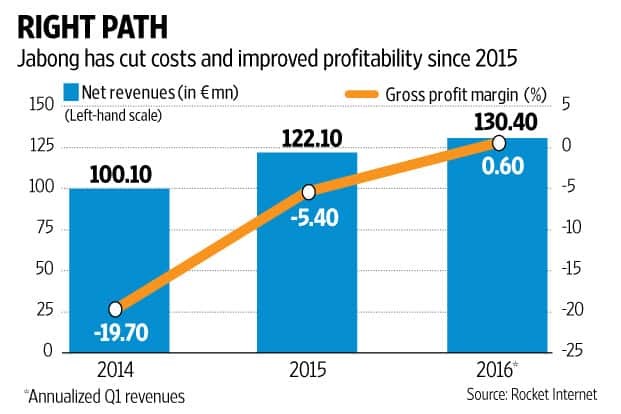 In Jabong’s case, after it began cutting discounts and costs last year, gross margin has improved. In the year till December 2014, Jabong had a loss at gross margin level, amounting to 19.7% of net revenue, which fell to 5.4% in 2015. In the January to March quarter of 2016, it managed a break-even at the gross profit level.

Like most Indian e-commerce companies, Jabong has increased its focus on profitability and unit economics since last year at the cost of a lower gross merchandise value. Analysts at Kotak Institutional Equities said in a note to clients last month, “We believe this (shift to focus on profitability) may be a function of limited availability of capital, leading companies to focus on cash generation... Most companies we spoke to are also evaluating other revenue streams such as advertising and online content to better leverage their platform".

With lower competition in the fashion and apparel segment, the Myntra-Jabong combine can reduce discounting and work towards being profitable. Besides, given the high market share, it is one segment in which it can clearly give Amazon a run for its money.