How the end of H1B visa lottery could impact Infosys, TCS, Cognizant

Analysts point out that if the way ahead is 'higher-salary first', the annual H1B visa quota could be filled at a minimum salary of $75,000

US President Donald Trump signed an executive order last week to promote ‘Buy American’ and ‘Hire American’ policies. Among other measures, the order directed four government departments to ensure that H1B visas are awarded to the most-skilled or highest-paid applicants.

In a press briefing before the order was signed, an official in the Trump administration disapproved of the lottery system of visa allotments, adding that outsourcing companies such as Tata Consultancy Services Ltd, Cognizant Technology Solutions Corp. and Infosys Ltd corner the lion’s share of visas. Cognizant is a US firm that is considered an Indian one because most of its operations are in India and it was set up to leverage the India advantage that Indian IT services firms did. 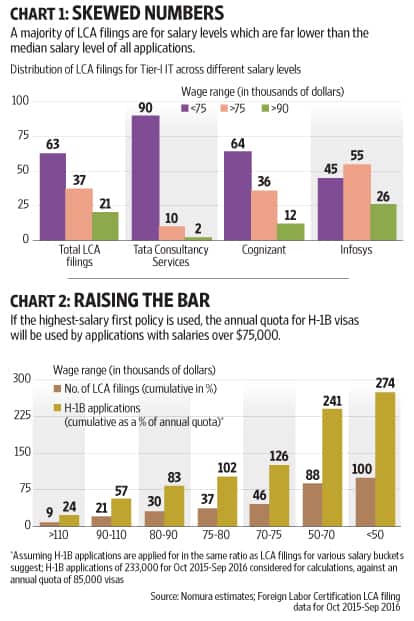 How will Indian IT companies be impacted if the lottery system is replaced with, let’s say, a system where applications with the highest salaries are given preference?

Analysts at Nomura Financial Advisory and Securities (India) Pvt. Ltd point out that if the way ahead is ‘higher-salary first’, the annual H1B quota could be filled at a minimum salary of $75,000, with more than 50% of the quota being filled by applications where the salary is higher than $90,000. The majority of LCA (labour condition application) filings by Indian companies last year were for salary levels below $75,000.

If these companies raise salary levels for on-site staff to $75,000 to try and get a higher share of the H1B quota, their margins can be impacted by 40-120 basis points, the brokerage says. One basis point is one-hundredth of a percentage point. Another option is to hire locals, although this route too will result in lower profit margins. Of course, this analysis is restricted to the impact of only a change in the lottery system. If the US government follows up with laws that raise minimum salary levels, the impact will be much higher.

For its calculations, Nomura has used publicly available data for LCA filings, where company-wise data is available to an extent, and extrapolated it for H1B applications data, where a company-wise break-up is not available. An LCA filing, which is a prerequisite for getting an H1B visa includes filings for new visas, renewals as well as visa transfers. There were 648,000 LCA filings last year, of which around 233,000 were for new H1B visas.

According to Nomura’s calculations, if average salary levels are raised to $75,000, TCS and Cognizant’s average salary for H1B applications would rise by 13%, 9% and 4% respectively, compared to current levels. The impact for Wipro Ltd and HCL Technologies Ltd is estimated at 9%, resulting in a 50-60 basis point hit on margins.

Also read: H1B visa curbs: India talks tough, signals it may hit back at US

Between October 2015 and September 2016, there were a total of 233,000 H1B visa applications against the total quota of 85,000 visas. With this quota, 20,000 visas are allotted to applicants with a Master’s degree and 6,800 visas to applicants from Singapore and Chile. Adjusted for these sub-quotas, there were 3.5 applications for every one visa on offer. In the following two years, ending September 2017 and September 2018, the number of applications stood at 236,000 and 199,000 respectively. Since there is roughly a 30% chance of getting a visa for every application, companies, the allegation goes, apply for a far higher number of visas than they actually need, with a view to increasing their chances at allotment.

If the US government decides on a highest-salary first policy, the number of applications can be expected to fall.

According to Nomura’s calculations, most tier-1 companies (excluding TCS) will not have issues procuring visas, since 32-55% of their LCA filings were for positions with a salary level greater than $75,000. In TCS’s case, only 10% of LCA filings fell in this bracket.