Savvy traders have been cashing in annualized returns of around 30% post tax, and that too by taking fairly low risks, thanks largely to Sebi's misguided policy on share buyback offers

If it’s too good to be true, maybe something’s wrong. Savvy traders have been cashing in annualized returns of around 30% post tax, and that too by taking fairly low risks, thanks largely to the Securities and Exchange Board of India’s (Sebi’s) misguided policy on share buyback offers.

The latest buyback offer by Infosys Ltd can result in annualized returns of over 100%, with a low probability of negative returns, thanks to the sharp fall in the company’s shares. How does the scheme work? 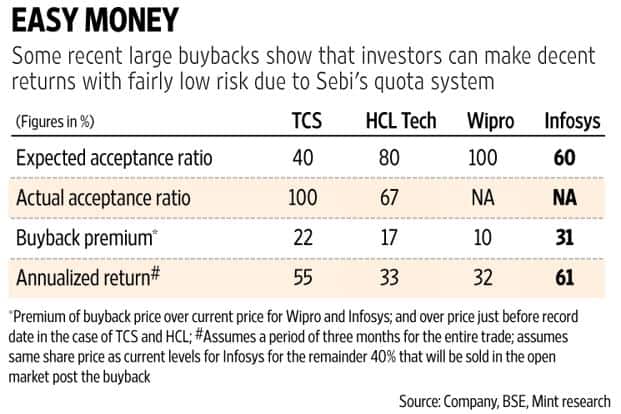 The regulator has mandated that companies reserve 15% of buyback offers for small shareholders with holdings worth less than Rs2 lakh. These shareholders typically own a fraction of the company’s shares, which essentially means that all or most of the shares they tender in buyback offers get accepted. The buyback offers are generally at a handsome premium to prevailing prices. What’s more, as one such trader points out, the tendering process has become a breeze lately, with even an email to the broker sufficient to tender shares in a buyback, unlike in the past when physical forms had to be submitted to the company.

Thanks to all this, a bunch of savvy traders and their clients are exploiting this opportunity by buying shares that are worth less than Rs2 lakh just ahead of the record date and then tendering them in the buyback. Some traders deploy additional capital in the trade by buying shares in the names of other family members as well. As such, what is perhaps intended as protection for unsophisticated retail investors by Sebi is being taken advantage of by experienced and well-to-do traders who don’t need the regulator to hold their hand.

Sebi’s obsession with mothering retail investors in the equity markets has led to numerous policy missteps—it’s high time it realised that these result in unintended consequences.

Earlier this year, Tata Consultancy Services Ltd (TCS) bought back shares at a premium of around 22% to prices which were prevailing just before the record date of the buyback. Based on the total number of small shareholders, and assuming that all such shareholders tendered shares in the buyback, the so-called acceptance ratio was estimated to be around 40-45%. In other words, only eight or nine of every 20 shares were expected to be accepted by the company in the retail quota.

But as it turns out in most cases, a number of retail shareholders don’t tender shares for various reasons. In TCS’s case, more than half of those qualified didn’t tender their shares, which meant that for those who did, the acceptance ratio was 100%.

While the risk in such trades is low, it isn’t entirely absent. For instance, when HCL Technologies Ltd bought back shares, the acceptance ratio turned out to be lower than what most people had initially expected.

Traders derive the proportion of small shareholders from a break-up of shareholding provided by companies in their annual report. In HCL’s case, the last available numbers were for March 2016, based on which an 80% acceptance ratio was expected. But by the time the company announced its shareholding pattern as on the record date for the buyback, the actual number of small shareholders had soared compared with March 2016 levels, and the expected acceptance ratio fell to 37.5%.

Of course, not all hope was lost—because of low tendering, the eventual acceptance ratio was 67%, and the traders made money yet again.

Early adopters of the trade started over a year ago with buybacks by Bharti Airtel Ltd and Bharti Infratel Ltd, and with the number of buybacks having increased considerably this year, the flow of relatively easy money has increased.

The writer does not hold any positions in the companies discussed here.