Hurricane Harvey has shuttered about 23% of US refining capacity, potentially cutting fuel-making ability to the lowest level since 2008

Gasoline prices surged in New York, extending its longest rally since 2013 as an important conduit of the fuel from the Gulf of Mexico to the US east coast began to close due to the effects of Tropical Storm Harvey. Motor fuel prices climbed as much as 6.6% in New York, advancing for an eighth session, while crude oil was little changed. Hurricane Harvey has shuttered about 23% of US refining capacity, potentially cutting fuel-making ability to the lowest level since 2008 and depriving the Colonial Pipeline of supplies. Gasoline for September delivery, which expires on Thursday, climbed as much as 12.39 cents to $2.0086 a gallon on the New York Mercantile Exchange, the highest in more than two years. Bloomberg

US payroll gains top in five of seven months

In an economy growing at a moderate pace at best, the US job market keeps on shining. Payroll gains topped forecasts in five of the past seven months, putting the 2017 average increase of 184,000 almost on par with last year’s 187,000 and above levels typical for the eight-year expansion. Analysts expect barely any fall-off from that pace in August figures due on Friday, amounting to job growth about double of what’s needed to keep the unemployment rate steady in the longer run. Employment probably rose by 180,000 this month after 209,000 in July, according to the median estimate in a Bloomberg survey ahead of the labour department’s data. Bloomberg

Domestic steel prices are rising steadily. Hot rolled coil (HRC) prices jumped 10% to Rs39,250 per tonne between the first week of July and end-August. This is partly due to robust demand from the auto sector, and a recovery in infrastructure and capital goods sectors. Demand for steel has expanded 5% year-on-year in the June quarter, compared to a 6% contraction in the March quarter (see chart). 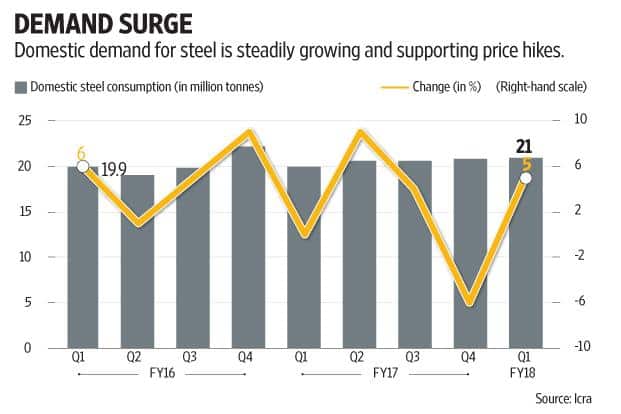 According to an Icra Ltd report, domestic prices are toeing the line of international prices. China, a big consumer of steel, has seen supply correct after steel capacity was closed in the last two years to tackle oversupply. Robust HRC export offers led to a 30% rally in global HRC prices between June and August 2017.