Small- and mid-cap mutual funds open doors again, but should you invest?

The doors are opening up and you may walk if you wish. Small-cap mutual funds are calling you to open your wallets and invest. On Monday, L&T Emerging Businesses Fund, a small-cap mutual fund, started to allow investors to invest lump sum as well as through systematic investment plans (SIPs) with no limits. In December 2017, it had stopped accepting applications (lump sum as well as fresh SIP registrations) in excess of ₹ 2 lakh per transaction per day. Taking advantage of a continued correction in small- and mid-cap stocks, mutual fund houses are increasingly looking to invest in them at current market prices.

Elsewhere, DSP Small Cap Fund (earlier DSP BlackRock Micro Cap Fund), also opened its doors, on Tuesday. It will now allow investors to start fresh SIPs and systematic transfer plans (STPs, a facility where investors can invest a lump sum amount in a liquid or debt fund and can then systematically transfer amounts to an equity fund). DSP Small Cap Fund will, however, still not allow lump sum amounts. The S&P BSE Small Cap index has fallen by 11.08% so far this year, as against a 13.6% rise in S&P BSE Sensex. In 2017, the S&P BSE Small Cap index had risen by almost 60%. Similarly, after going up by 48.13% in 2017, the S&P BSE Midcap index has fallen by 5.61% so far this year. After the fall of stock prices of small- and mid-cap companies, mutual fund houses feel that many such companies are now available at attractive valuations. “The froth in these (small- and mid-cap) categories has reduced. For the past one-and-half years—up to the end of 2017—everyone was chasing this segment. After a very steep correction this year, people now feel that large-cap stocks are fairly valued and small-cap stocks are volatile. Hence it is a good time to start looking at such stocks," said Kalpen Parekh, president, DSP Investment Managers Pvt. Ltd.

On the back of a rise in market in 2017, especially in the small- and mid-cap space, many investors had made fresh as well additional investments in these funds, mainly through SIPs. Inflows in mutual funds through SIPs in the financial year (FY) of 2017-18 totaled to ₹ 67,190 crore, up from ₹ 43,921 crore in FY2016-17, according to figures from the Association of Mutual Funds of India (Amfi, the mutual fund industry’s trade body). 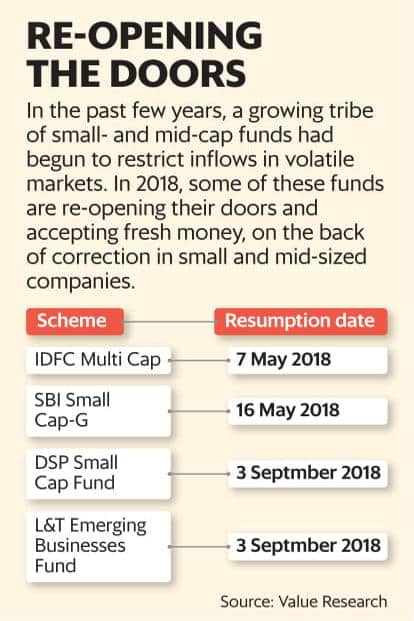 A few mutual fund houses, over recent years, have increasingly stopped inflows in small- and mid-cap mutual funds, in cases where their size becomes bit large for them to manage. DSP Small Cap Fund first limited its inflows to ₹ 2 lakh per new SIP/STP instalment as well as for lump sum investments on 1 October 2014. In August 2016, this limit was further tightened to ₹ 1 lakh per new SIP/STP instalment. Finally, in February 2017, it stopped all registration for fresh SIP and STPs as well as any lump sum amount, and just let the existing SIPs and STPs continue.

Another fund, IDFC Multi Cap Fund (earlier IDFC Premier Equity Fund), too, has regularly stopped inflows in the past as and when its fund managers felt the dearth of stocks available at what they feel are reasonable valuations. It too reopened its door or lump sum investments on 27 May.

“Mid- and small-caps have outperformed all other categories in the long term. The recent correction in small-caps have made mispricing in many quality stocks and this should give fund managers the opportunity to craft a long-term portfolio. Though the category is loaded with risk in the short term, many small-cap investors have seen huge returns in the long term. Investors having long-term goals should make use of this window and invest systematically," said Ravi Kumar T.V., director, Gaining Ground Investment Services Pvt. Ltd.

According to Value Research, mid- cap mutual funds have returned around 26%, as against 22% from large-cap funds, over the past 15-year time period as on June 2018. According to details provided by Value Research, SBI Small Cap Fund and IDFC Multi Cap Fund that had put restrictions earlier, have been accepting fresh money since 16 May 2018 and 27 May 2018, respectively, subject to some limits.

But since the small- and mid-cap basket of stocks have corrected sharply this year, liquidity in these stocks have gone down too. Not all are convinced that this is a good time to enter the small- and mid-cap space. Mirae Asset Emerging Bluechip Fund, an erstwhile mid-cap fund, has restricted inflows since November 2017. At the time, it restricted SIPs only on 10th of every month. Already, in October 2016, fresh SIP and STP registrations were allowed only to an amount of ₹ 25,000 per instalment. Also, since October 2016, lump sum investments have not been allowed. Swarup Mohanty, chief executive officer, Mirae Asset Global Investments (India) Pvt. Ltd, told us that his scheme will remain shut for “some more time". Mohanty believes that low liquidity in small sized companies is still a concern and the fund house might open it up for fresh inflows “sometime in the last quarter of 2018".

Deepak Chhabria, chief executive officer and director, Axiom Financial Services Ltd, a Bengaluru-based distributor of financial products, said: “At the moment, I am still on the sidelines. Whatever profits I have booked for my clients, I will wait for some time before I re-deploy them back in the small- and mid-cap space, through STPs. There is still room for correction (in markets). Or the earnings have to go up more to justify valuations."

Be selective. Although the mid- and small-cap space has corrected, don’t expect too much, too soon. If equity funds require to invest with a minimum of a 5-year time horizon, small- and mid-cap funds require more patience. Also, just because one or few of such funds re-open for subscription, doesn’t mean you have to jump in. Look at the scheme’s track record across market cycles and then decide on one, depending on how much allocation to such funds is necessary in your allocation.